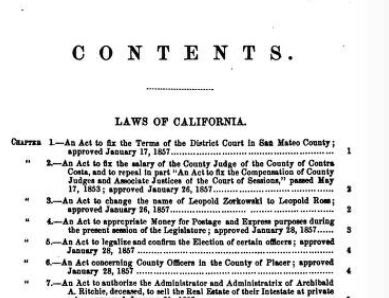 A digital copy of this publication can be found at Internet Archive.

chapter 3, pg 2
It shall be lawful for the person known as Leopold Zorkowski to change his name to Leopold Ross.

chapter 59, pg 57
It shall be lawful for the person known as Edward C. Higginbottom to change his name to Edward Compton Howard.


PAYMENTS FROM THE STATE OF CALIFORNIA

chapter 202, pg 234
$750 payment to E. H. Burns for services rendered in the suppression of Indian hostilities in the County of Klamath.

resolution VIII, pg 371
$19,140.24 payment to General A. M. Winn for money expended by him in burying the dead, reviving the sick and distressed and building a hospital in Sacramento City in the years 1849 and 1850.

resolution IX
$15, 280 payment to William Grove Deal for relief given to the indigent sick at Sacramento City in the years 1849 and 1850.

chapter 97, pg 99
The executor of the estate of Josefa Soto de Stokes, deceased, late of the County of Monterey is authorized to sell the real estate of said deceased.

chapter 112, pg 123
Agnes Howard, Henry F. Teschemacher and George H. Howard executors of the last will and testament of William D. M. Howard, deceased ,late a resident of the City of San Francisco, are empowered to sell the real estate of the said William D. M. Howard died seized.

chapter 175, pg 198
Maria Ygnacia, wife of Jarvier Alvisa and Maria Juana, wife of Jose Rochine, who are both minors are hereby empowered to join with their husbands in the sale, transfer and conveyance of any real estate belonging to them in the State of California.

chapter 205, pg 236
Thomas O. Larkin, guardian of his infant children is authorized to sell a tract of land belonging to Frederick H. Larkin, Frances R. Larkin, Caroline A. Larkin and Alfred O. Larkin situated on the west side of the Sacramento River in the County of Colusi containing 10 spanish leagues of land derived from a grant of the Mexican government dated December 1844.

chapter 214, pg 246
Henry W. Halleck, Archibald C. Peachy and P. Warren Van Winkle, appointed executors by the last will and testament of Joseph L. Folsom, deceased, late of the County of San Francisco are authorized to sell real estate that the said Folsom died seized in the State of California as may be sufficient to pay allowances to the family of the deceased.

chapter 215, pg 247
Rafael Gomez, a minor, aged about 18 years and a resident of the County of Monterey is empowered to receive receipt for, control, manage and enjoy any and all property to which he is entitled of the estate of his deceased father, Rafael Gomez.

chapter 232, pg 269
The guardian of Jose Francisco de Salpha Knight, Gregoria Knight, Leonora Knight, Guillermo Knight, Victoriana Knight and Aldianita Knight, infant heirs of the estate of William Knight, deceased is authorized to sell an undivided interest in the tract of land in the County of Yolo known as "Rancho de Carmel" the aggregate of such sales not to exceed in quantity 2 and 1/3 leagues of land.

chapter 259, pg 324
It shall be lawful for Priscilla H. Denham, wife of F.L. Sargent to sell land in the City of San Francisco known as fifty-vara lots, numbered 868 and 871, the lots being the property of her minor children Seth H. Lincoln, Granville H. Lincoln and George S. Lincoln, by her former husband Seth H. Lincoln.  It is her duty to retain the proceeds from any such sale free and independent of the control of her husband.

chapter 217, pg 249
Authorizing William Moody and Morgan Hart to build a wharf in the County of Solano.

Authorizing John A. Rudisall to erect a wharf on the south side of Petaluma Creek in Sonoma County at what is called Hay Stack Landing not to exceed 100 feet in width and 600 feet in length and collect wharfage.