DNA and National Society Daughters of the American Revolution


Although no single DNA test can point to a specific ancestor, advances in the science and interpretation of DNA testing have placed the DAR in a position to begin accepting DNA evidence in a limited manner within the context of traditional genealogical evidence.

Many advances have been made in the testing and interpretation of DNA results for use as evidence in genealogical research, but the information is still very complex. With the new DAR policy, DNA test results can be used for evidence of lineage for DAR applications or supplemental applications, but specific criteria must be met. To help navigate how individuals can use DNA as a piece of evidence for a DAR application, the DAR is launching an online genealogy class “DNA and DAR.”

The “DNA and DAR” online course will provide an introduction to the basics of DNA and applying DNA to genealogical research along with the impact of DNA on the process of documenting a DAR application. The course will cover other topics such as guidelines for using DNA for DAR applications; case studies for determining whether DNA evidence is an appropriate avenue of research for a particular application and the steps you would take to take the test and how to interpret the results; along with specific instructions for submitting the application with the DNA report. The “DNA and DAR” online course is open for anyone to participate and costs $100. For more information and to enroll, visit the  DAR Genealogical Education Program website.

DAR begins accepting Y-DNA evidence, effective January 1, 2014, in support of new member applications and supplemental applications. DNA evidence submitted along with other documentation will be considered along with all of the other source documentation provided to prove heritage. Y-DNA will not be considered as stand-alone proof of linage because, while it can be used as a tool to point to a family, it cannot be used as absolute proof for an individual. For those applicants wishing to submit DNA evidence as proof of lineage along with their other traditional proof documentation, they must submit Y-DNA test results from at least two test subjects following criteria outlined in the guidelines and test requirements for Using DNA Evidence for DAR Applications.

Identifying the specific types of situations in which DNA can be accepted by the DAR, as well as the testing and reporting methods for the surrogate Y-DNA test subjects, are outlined in documents that can be found HERE

Additional information for members and the public to help them learn about this new policy for the DAR application process, including communications, educational materials, guidelines and procedures, can be found HERE
1 comment: 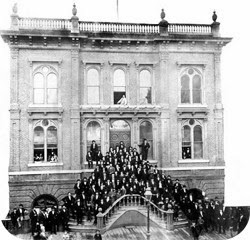 For 160 years, the Turn Verein (pronounced “TOORN-fair-ine”) has served as the center for German traditions in Sacramento. Founded in 1854, this historic club is where locals with German ancestry—and those with an interest in German culture—congregate to socialize, study German language, celebrate, exercise, and carry on revered German customs.

After the failure of the 1848 uprising  in which called on citizens to free themselves from the rule of monarchy, the Germans who emigrated to the United States, called the “Forty-Eighters,” carried with them the Turnverein culture.  By this time the focus had turned toward more non-gymnastic activities such as funding libraries and reading rooms.

In the early 1990's, Dr. Jon Ingelman proposed rescuing all the letters, photographs, club records, photographs and other memorabilia that was in the basement of the building.  From this comes an incredible amount of archival material which is now in the library.