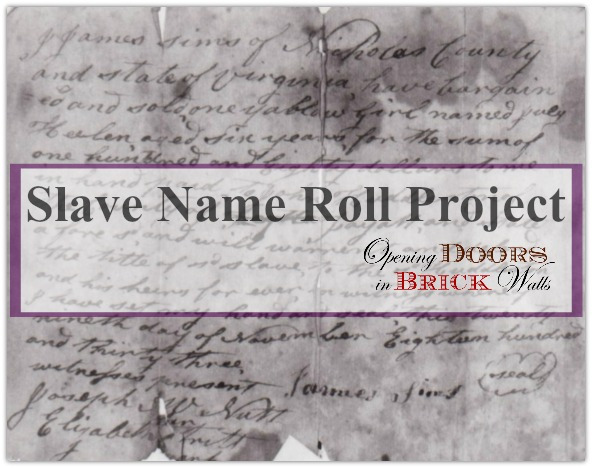 During Black History Month in 2015 a Facebook group of Genealogy Bloggers began the Slave Name Roll Project with five contributions. The project objective is to record information about named slaves whenever and where ever they may be found so that African-American genealogists and family historians may break through the wall that is the 1870 census. Documents such as wills and other probate records, bills of sale, court cases and newspaper advertisements for run away slaves are often rich sources of information.


They ask when submitting a contribution you follow these guidelines:

Please include the following information:

Currently, they have over 500 submissions from 25 states including Washington, DC and from four countries:  Bahama Islands, Great Britain, Jamaica and Puerto Rico.

I came across a probate record from Shelby County, Tennessee that named 47 slaves.  Not only did it name them, it also gave their ages and grouped them as families in the probate inventory.  I sent it to their website and hopefully it will be published soon.

I also have created a new page here on my site that is full of links to research your African American family history.  All of the links will take you to records or educate you on how to find the records.

Look for the tab at the top of this page "African American Research."

Have a great weekend!

Treat Yourself To Fun For Under $20 While browsing at the Library of Congress and the NARA (National Archives and Records Administration) websites, my eye caught sight of their "STORE" tab.

So I took a few minutes to see what I could see.  Well ok, I took more than a few minutes but it was for research for this blog post.

While each website has a multitude of really neat things to buy, there were a few I thought were fun and in some weird way maybe could help with the work I do every day.

The Library of Congress Store 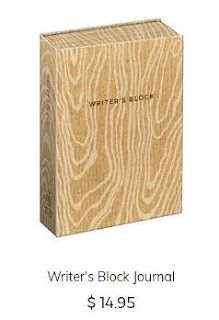 Looks like a block of wood.  It could be helpful when you have writer's block.   Just looking at it would make me think "OK, you have really resorted to this?  Get writing!" 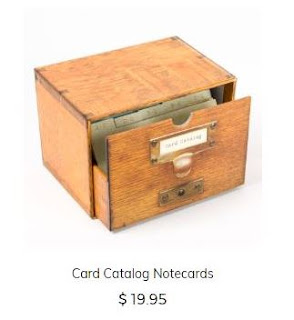 What a cute old library card catalog box.  Useful to me because believe it or not I use index cards ALL THE TIME.  In fact I need to write a blog post on how and why I use them. See - this gift to myself is already working and I haven't even bought it yet! 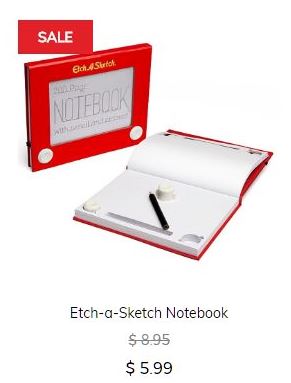 Just because.  And it is on sale. 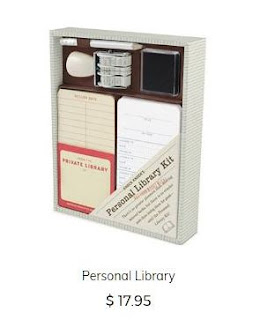 Do you lend out books from your genealogical collection?  This personal library kit can help you keep track of where your books are and annoy the person who borrowed the book all at the same time. 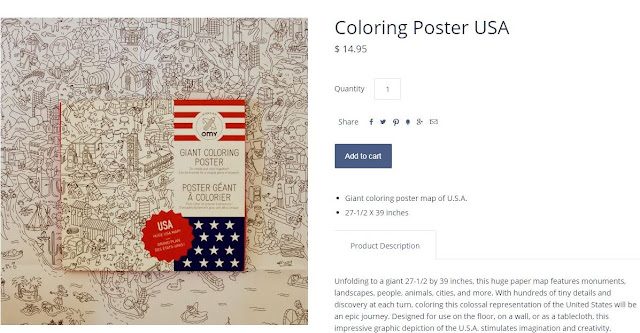 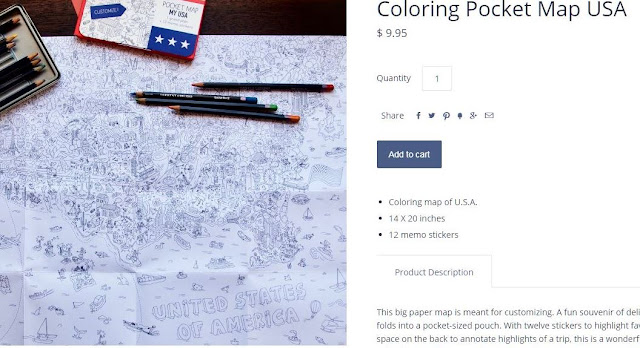 Coloring books and such for adults is all the rage now, why not a poster size map of the United States? 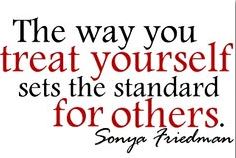 This past month, client projects and researching my own family history had me looking up words and phrases I wasn't familiar with.  I thought I'd share a few of the more interesting ones with you.

Recital - a general term used most frequently in deeds to describe the reason that a contract is being drawn.  It may indicate a relationship between the parties involved or a relationship with a previous owner.

Willow Bench - a share of a husband's estate enjoyed by his widow, besides that which was held jointly.

Purchased Court - a session not on a regular court schedule.  The costs of this session were paid for by either the plaintiff or defendant rather than the government.

Writ of Inquiry - an order to the sheriff which directs him to determine, with the help of a jury, damages which cannot have a dollar and cents value placed on them.

Eaton Code - in 1657,  this practical interpretation of biblical law was published in London.  Each household in New Haven, Connecticut was required to own a copy.

Writ of Venditioni Exponas -  an order to a sheriff to sell goods of a person who owes the court money.

Cohabitation Record - usually found in a county office which states the legal married status of emancipated slaves.  These records were made at the end of the Civil War.

Witness Corner or Witness Tree  -  a surveyor's mark.  A tree or rock on which is carved a reference plus the initials "w.c." to the corner of a tract of land.

Court of Errors - this was the highest court in the state of New York from 1784-1846, when it was abolished.  Its records are held by the New York State Archives.

Timber Right - to own the trees, but not the land upon which they grow.

Sufferer's Land -  land in Erie County and Hudson County, Ohio given to citizens of several Connecticut coastal towns whose property was burned by the enemy, with the assistance of Benedict Arnold during the Revolutionary War.

Woods Colt  -  a child born out of wedlock.

Cordon Bleus - children of a relationship between a black woman and a Frenchman.  These children were usually wealthy enough to have been educated in France, but were not accepted by either black or white society.

In Terrorem Clause - the statement in a will which says that a person may or may not do a certain thing or he will be disinherited.

Every day I learn something new.  Have you come across words or phrases in your genealogical research that had you scrambling for a dictionary?
No comments: 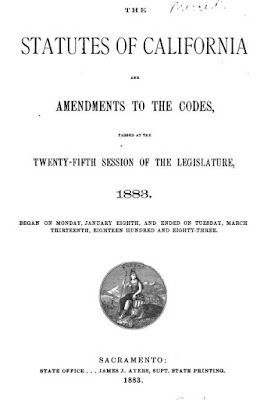 Judy Russell, "The Legal Genealogist", tells us over and over again about state statutes and the gold mine of genealogical information they may hold.  You can read about a few of her finds HERE, HERE and HERE.

Well,  I was hooked immediately and started a new project - abstracting genealogical information from the California Statute Books.

In the 1883 Statutes of California, I found only one item of interest:

$25,000 payment to James Saultry, ex-Guard at the State Prison at San Quentin for personal injuries namely the loss of both arms while in the discharge of his duties under the orders of his superior officer.

I had to know more about this man and his horrible accident.  What happened?  Was there a prison riot and he was maimed?

Checking the newspapers I found that in 1883, James Saultry had fired a cannon for the 4th of July festivities at San Quentin Prison, the cannon backfired and he had both of his arms blown off!

Another newspaper article I came across was his obituary from the Saulsalito News, 17 August 1888:

DEATH OF JAMES SAULTRY
Town Trustee James Saultry died at his residence last Monday.  For many years Mr. Saultry has been identified with the interests of this Coast, being an active and energetic man.  In 1883, while employed at San Quentin, he had the misfortune to have both his arms blown off while firing a national salute on July 4th.  In March of the same year, the Legislature passed a relief bill, granting him a pension for the remainder of his lifetime.  Some $25,000 was invested in 6 per cent bonds and he has since drawn the interest on that investment.  He leaves a widow and three children, the eldest being 8 years and the youngest 14 months.  Mr. Saultry was highly respected by all who knew him.  Flags throughout San Rafael were lowered as a mark of respect to his memory.

The widow of the late James Saultry has been allowed the interest on $20,000 during  her lifetime.

Not able to let the story go quite yet, I searched California probate records and census records and learned the names of his wife and children.

I was able to reconstruct and entire family from just one man's name in an obscure old book that recorded California statutes.  I absolutely love genealogical research.  Thank you Judy!