1913 Was An Interesting Year In California 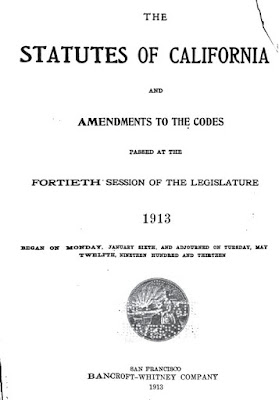 In the 1913 California State Statutes, there are no name changes, probate issues, contract awards, etc., it only contains acts authorizing payments of claims to citizens.

In 1913 there were 17 claims that the State of California paid out. They ranged from $19,168.76 to $5.34.  A couple of them really peaked my interest and so clickty-clack, off I went to investigate. Make sure to scroll down and read the great stories for some of these claims.

Chapter 453, pg 883
An Act to pay the claim of Duane Bliss in the amount of $19,168.76
Walter Danforth "Duane" Bliss was an architect of considerable note.  Among his many accomplishments, he designed:
City of Oakland Public Library, 1901
The Columbia Theater, San Francisco, 1909
The James Flood house, 2222 Broadway, Pacific Heights, San Francisco, 1912
City of San Francisco Public Library, Richmond Branch, 1914
The Metropolitan Club in San Francisco, 1916
Southern Pacific Railroad Passenger Depot, Sacramento, 1924
I wasn't able to find what the claim was for, but given the large amount, I am guessing he was paid for his services as an architect rather than a personal claim.

Chapter 494, pg 100
$100 payment to C. A. Palmer for services rendered by him as attorney for plaintiff in the case of people of the State of California vs. Deta Lima

Chapter 519, pg 910
$1609.40 payment to John Ewart for the filling and grading of American Street in the City of Stockton fronting the property of the Stockton State Hospital

Chapter 535, pg 917
An Act to pay the claim of Mr. Frederick Maskew in the amount of $88 for services rendered as Deputy Quarantine Officer of the State

Chapter 621, pg 1152
An Act to pay the claim of J. W. Galloway in the amount of $1000
Special Deputy John Galloway had arrested Herbert LeCornec, George LeCornec and J.W. McNamara for poaching steelhead trout in the Larkspur slough in Marin County.  While his back was turned, Herbert LeCornec shot him in the head. Though severely injured, Deputy Galloway was able to return fire and shot and killed George LeCornec.  Deputy Galloway made a full recovery.  Herbert LeCornec was brought to trial for attempted murder, but unbelieveably the jury found him not guilty.

Chapter 624, pg 1153
An act to pay the claim of Grace Elvira Raynaud in the amount of $5000
Special Deputy Ernest Raynaud was on boat patrol when he arrested Antone Balesteri and Salvatore Balesteri for catching striped bass with an unlawful net near San Quentin Point in Marin County. A third man, Carlo Balesteri was not arrested but accompanied the men.  All of the men were in a boat.  A struggle ensued and both Dept. Raynaud and Salvatore Balesteri were killed.  Raynaud's skull had been beaten in and he had been shot between the eyes.  Antone Balesteri escaped and was never apprehended.  Carlo Balesteri was arrested, tried and convicted of first-degree murder and sentenced to life in San Quentin Prison.

Different newspaper reports of the event differ slightly in their facts.

The San Francisco Chronicle:   Warden Raynaud was working boat patrol with Deputy Commissioner M.S. Clark that day. Warden Raynaud made contact with and arrested two brothers, Antone and Salvatore Balesteri, for taking striped bass with an illegal net. They were taken into custody and placed on the warden's boat. A third man who was with them, Carlo Balesteri was also taken aboard the Warden's boat to act as an interpreter.

The San Anselmo Herald:  Deputy Clark was able to shoot and kill Salvatore Balesteri and wound his nephew, Caloggero Balestri before being struck in the head with an oar. Deputy Clark was thrown overboard where one of the remaining Balesteri's tried to run him over with the boat. Other fishermen in the area rescued Deputy Clark, but Warden Raynaud died of his injuries.

Regular Deputy Frank P. Cady and Special Deputy Joseph Nelligan arrested ten Indians for spearing spawning trout on streams running into Tule Marsh (aka Moon Lake), Lassen County.  Three of them - Wilson Duke, John Hendricks, and John Pede - resisted arrest, disarmed Dept. Cady and shot both Dept. Nelligan and Dept. Cady.  The ten poachers fled, leaving the two deputies for dead.  Cady and Nelligan managed to get help and they made a full recovery.  Pede and Hendricks were arrested, tried for assault for murder, found guilty and sentenced to 3 years at San Quentin Prison.  Wilson Duke was found guilty of assault with a deadly weapon against a peace officer and was sentenced to five years at San Quentin.

Chapter 699, pg 1444
An Act to pay the claim of William J. Burns in the amount of $10,000
William J. Burns was known as "America's Sherlock Holmes." In 1889, he entered the U.S. Secret Service, where he had considerable success in tracking down counterfeiting operations, both in the United States and Costa Rica. He also uncovered bribery and land fraud by government employees, leading to the conviction of several federal, state, and municipal officials.  Burns left government service in 1906.  He served as Director of the Bureau of Investigation (predecessor to the FBI) from 1921 to 1924. 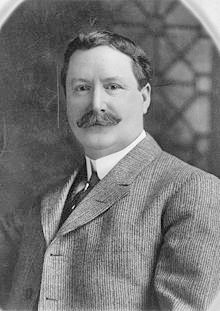 With this information about William Burns, I was able to easily find him in newspapers to learn why he was paid $10,000.  On 1 October 1911, James McNamara and his brother John McNamara blew up the Los Angeles Times building to protest a labor union dispute.  20 people were killed in the explosion.  William J. Burns tracked the brothers down and when the McNamara's were convicted, Burns was given a $10,000 reward.

This claim deserves a post all its own.  Coming Soon - how the death of Bert Blanchard uncovered a huge police scandal in San Francisco.

NOTE:  For some reason, this book is no longer available in Google books. Two weeks ago I was able to view and download for free.
No comments: 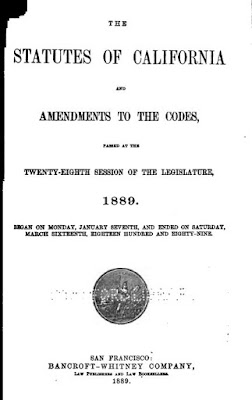 A digital copy of this publication can be found at Internet Archive.

PAYMENTS FROM THE STATE OF CALIFORNIA

chapter 6, pg 4
$6624 payment to N.P. Perine for furnishing granite and statuary and labor performed for the Insane Asylum at Napa

chapter 13, pg 11
$6500 payment for expenses in the case of Che Chang Ping, now on appeal to the Supreme Court of the United States.  $2500 payment to each John F. Swift and S. M. White for their services in representing the interests of the people of the State of California

chapter 34, pg 41
$532 payment to J. J. Lynch for services rendered as Clerk in the office of the Surveyor General

chapter 36, pg 42
$116.55 payment to John A. Cole for conveying a prisoner from Folsom State Prison to San Bernardino for a new trial ordered by the Supreme Court

chapter 37, pg 42
$131.50 payment to Chas. E. Hughes for conveying a prisoner from San Quentin to Crescent City, Del Norte County for a new trial ordered by the Supreme Court

chapter 46, pg 48
$150 payment to W. E. Dodge for services rendered in reporting the proceedings of the Court Martial of Captain John A. Rapp

chapter 49, pg 49
$495 payment to William Guttenberger for the construction of an iron railing for counter in the office of the Treasurer

chapter 50, pg 50
$1300 payment to C. M. Bumbaugh for services in removing the rubbish deposited in the basement of the State Capitol and thoroughly whitewashing and fumigating said basement

chapter 51, pg 50
$288.35 payment to E. Lyons, C. M. Bumbaugh and L. M. Landborough for draping of the State Capitol on the occasion of the death of the late Governor Washington Bartlett

chapter 68, pg 65
$25 payment to A. A. Bennett for professional services rendered as consulting architect in making alterations in the State Capitol

chapter 69, pg 65
$118 payment to Ben Cohen for decorating the State Capitol for the Grant Obsequies

chapter 71, pg 66
$522 payment to William Pyburn, his heirs or assignees for services rendered as a private soldier in defending the eastern frontier of California against attacks of Indians

chapter 157, pg 176
$1775.50 payment to I. G. Wickersham for the extradition of Ang Tai Duck charged with the murder of J.C. Wickersham and wife in Sonoma County

chapter 158, pg 176
$300 payment to Gregory Valerro for damage sustained by him due to his horse having been injured by a defect in the planking of Mission Street on the waterfront in the City and County of San Francisco

chapter 163, pg 199
$104.25 payment to John Cravens for services as Janitor of the Supreme Court at Sacramento

chapter 167, pg 202
$5000 payment to George W. Mayberry for damages sustained by him in falling through the sidewalk on the State Capitol grounds.  He suffered severe internal injuries which have been pronounced incurable and wholly incapacitate him from working

chapter 185, pg 218
$468.15 payment to W. T. Beville of Colusa County for the extradition of W. S. Welling a fugitive from justice charged with murder

$4000 payment to Wilson De Letta, a carpenter working for the State Harbor Commission in San Francisco for personal injuries namely the breaking and permanent crippling of his right leg while obeying the orders of his superior officer
No comments: