At Ancestry.com I came across a new-to-me database about Jewish men who served in the U.S. Armed Forces during World War I.

"These surveys were sent out by the American Jewish Committee (AJC) Office of Jewish War Records as part of an effort to document the service of Jews in the American armed forces. The AJC felt it important to both record and publicize Jewish service—in particular casualties and decorated soldiers—in the war and sent out 16,000 questionnaires soliciting information on soldiers they believed to be Jewish. The questionnaires came in 2- and 4-page versions, though both forms asked for the same information. The longer forms were typically sent to officers, casualties, or next of kin." 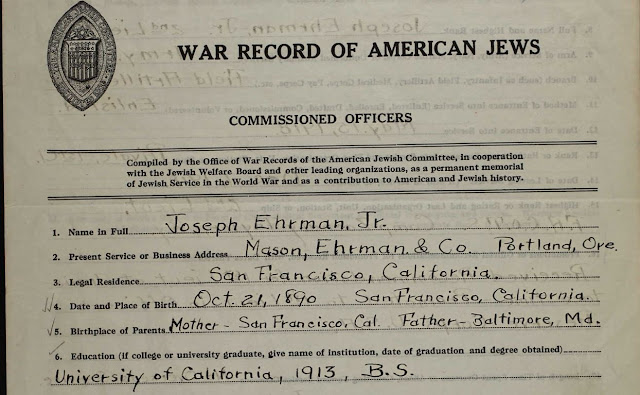 The last question is of great interest to me - asking for names and addresses of other Jews in the service that was known to the person filling out the questionnaire.  I found several men in this database who are related to my sister-in-law.  In each case, the men answered this question with at least the name of one man.  In most cases it was several.  These names I have added to that person's FAN club.  It has helped me link - through marriages - many families. 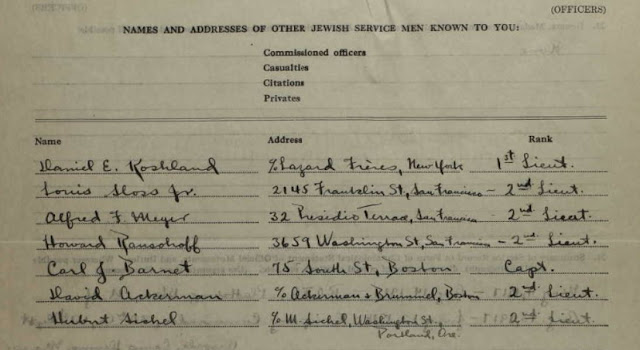 Also of interest is that several names of men I know had served as regular enlisted men - not an officer - did not come up when I searched for them in this database.  Only the names of commissioned officers were found.

The database can be found HERE.

These records are housed at the American Jewish Historical Society in New York.  To see the entry in the archival finding aid on their website click HERE.