Stories From The Research Committee 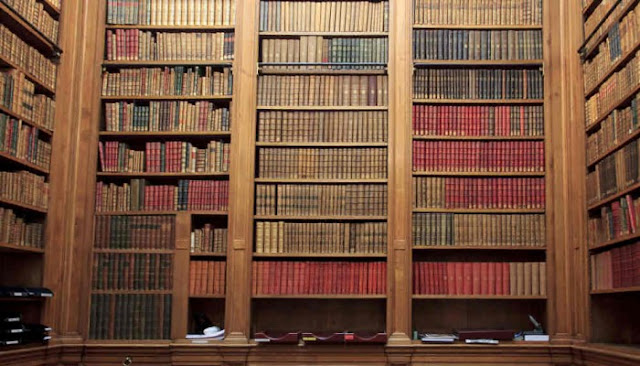 After I termed out as president of the San Joaquin Genealogical Society, I remained on the board as immediate past president.  I am also head of the research committee, handling requests for research in our county.

Today a request for an obituary led me down a 2 hour rabbit hole.  The obituary was for a woman named Louise Leger who died in San Joaquin County in 1955.  The person requesting the obit was employed by an heir searching company in France.  He wanted the obit to determine if Louise had any children.

When I didn't find an obit for Louise, I let the patron know there wasn't one and that concluded our business.  But I personally couldn't let the story go.  I decided to locate her death certificate. 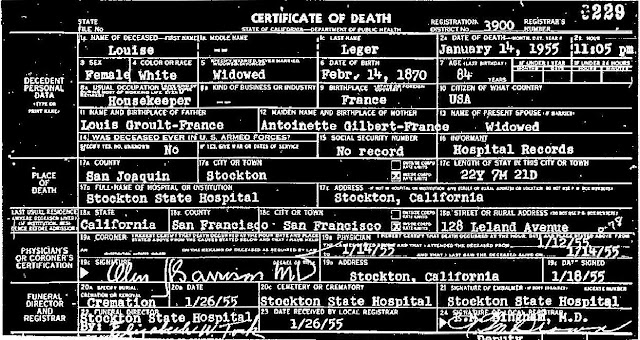 After reading the certificate, I understood why there wasn't an obituary.  Louise had died at the Stockton State Hospital for the Insane.  She had been a patient there for over 22 years at the time of her death.  She was cremated by the hospital and her remains were buried on the grounds of the hospital.  This was usually done when no known next of kin could be located.

This poor woman died all alone. I needed to learn more about her.

The death certificate gave her address before she had been committed to the hospital - 128 Leland Avenue, San Francisco.  A check in the San Francisco City directories did not list a Louise Leger.

The death certificate stated that Louise was born in France.  I decided to look at passenger arrivals.  I found her with two children.

Louise Leger, a widow, age 43 with her daughter Vivian Charlene Leger, age 19,  and son Andre Ernest Leger, age 18 arrived at the Port of New York on 22 February 1913.  They had sailed on the SS La Lorraine from Havre, France.

I did not find any of them in the 1920 census, but hit the jackpot in the 1930 census.  Living in the Bronx, New York I found that both children had married and had families of their own.

Where was Louise living in 1940?  At the Stockton State Hospital for the Insane.

Her children probably never knew what happened to her as evidenced by her death certificate.  Why did Louise move to San Francisco?  What happened after arriving in San Francisco that led to her commitment to the hospital for the mentally ill?

We most likely will never know what happened, but I feel better connecting Louise to her children.