Women of the DAR Come in All Shapes and Sizes

As you know, I am a proud member of the National Society Daughters of the American Revolution.  For the next two years I am will serve as regent for the El Toyon Chapter here in Stockton.

Our chapter has a monthly newsletter and I am obligated to contribute something.  A friend recently asked me "What kind of woman joins the DAR?"  After 4 hours of intense research (intense = no distraction by shiny things) I can tell you that currently over 170,000 women are members of DAR.  If you go back to the beginning in 1890 over 890,000 women have become members.

I can also tell you that the women of DAR come in all sizes, shapes and colors.  They are doctors, lawyers, astronauts, teachers, housewives, single parents, suffragist leaders, pilots, artists and even an admiral of the US Navy.


And then there is
Mercy Lavinia Warren Bump Stratton Magri 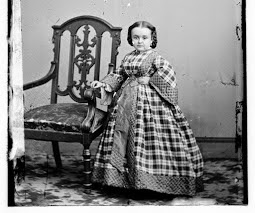 Now tell me true people - is this a "Shiny Thing" or what!!!  So for the better part of four hours I sat at the computer - clickty clack, clickty clack went my keyboard.

This woman had the most interesting and exciting life.  She was born in 1841 to James Sullivan Bump and Huldah Pierce Warren at Middleborough, Plymouth County, Massachusetts.  She came from a long-established and well-respected New England family that descends from five passengers of the Mayflower:  John Billington, Francis Cooke, Edward Doty, Stephen Hopkins and Richard Warren.    Lavinia's parents are of normal size as all her siblings with the exception of her younger sister Minnie.  Minnie who also had a form of proportionate dwarfism.

At the age of 16 she became a school teacher.  A few years later, she made a career change.  She left Massachusetts and went to Mississippi to work as a a miniature dancing chanteuse on her cousin's showboat.  P.T. Barnum, who was managing Tom Thumb at the time,  learned of Lavinia and brought her into his show.  Tom's real name was Charles Sherwood Stratton. 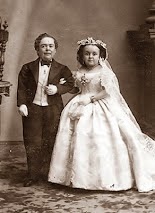 It must have been love at first sight, because just one week later, Tom Thumb and Livinia were married on 10 February 1863  in an elaborate ceremony at Grace Episcopal Church in New York City.  Her sister Minnie was her maid of honor.  P.T. Barnum, ever the show-man, didn't charge admission to the wedding.  He did however charge $75 a person to the first 5000 people who wanted to attend the reception at the Metropolitan Hotel. It was a sold out event.  They went to Europe for their honeymoon and one of the first stops was to England to call on Queen Victoria. 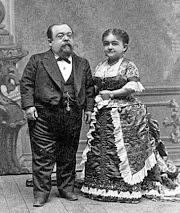 Twenty years later, on 15 July 1883, Tom suffered a stroke and died at the age of 45.  In 1885, Lavinia remarried to Count Primo Magri, an Italian dwarf and they operated a famous roadside stand in Middleborough, Massachusetts.  Lavinia died 25 November 1919 at the age of 78 and is buried next to her first husband Tom Thumb with a  grave stone that reads simply, "His Wife."

I wasn't able to find the date that Lavinia joined the DAR nor which chapter she belonged to, but I was able to find her DAR membership number - 43670 - and her  patriot ancestor.  Through her maternal line, Lavinia descends from Sylvanus Warren who served as a Sergeant in the Massachusetts Militia.