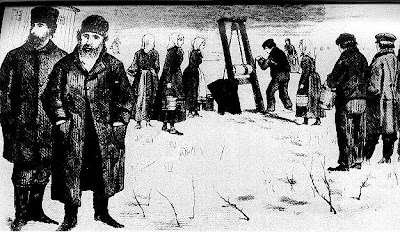 In 1763 Catherine the Great of Russia, published a manifesto inviting settlers to immigrate and colonize Russian promising free lands, expenses for the move, freedom from taxation for 30 years, and exemption from civil and military service for themselves and their descendants. The empress’s agents recruited settlers especially from the poorer German states devastated by the Seven Years’ War. My Befort family were among one of the first groups who made the journey in 1766 with hopes of a better future for themselves and their children.

A century after the first Germans had settled in the Volga region, Russia passed legislation that revoked many of the privileges promised to them by Catherine the Great. In 1878, 3/4 of the village of Obermonjou packed their belongings and came to the United States. 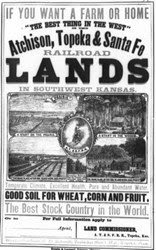 My 2nd great grandparents - Gerhardt Befort and Catherina Stecklein - arrived at the Port of New York on 17 July 1878 on the ship SS Donau. Scouts had been sent ahead of time to find a suitable place to settle. It was perhaps a poster like above that one of them saw and drew them to Kansas. Whatever the reason, it was Ellis County, Kansas that the majority of Catholic Volga Germans from Russia chose to live.

Russian-Germans in Kansas did not quickly adopt American customs and manners. As in Russia, they settled in close-knit rural communities and remained somewhat isolated from other residents. They preserved their language and traditions for decades, entering mainstream American life only gradually. My father was the first generation in his family to use English as a first language. Unlike most other immigrants to Kansas, the Russian-Germans generally arrived in large groups, often by the trainload. They caused something of a sensation and attracted a great deal of curiosity. The clothing of early Volga Germans was a constant source of amusement to newspaper columnists. Accustomed to severe Russian winters, the Volga Germans wore longs sheepskin coats, heavy felt boots, and head coverings much heavier than the Kansas climate required. The women generally wore dark colored clothing. The only bits of color you might see would be embroidered on their black shawls they wore to cover their heads.They were Catholics and very devout. Religion played a very important part of their daily lives.

The very year of their arrival the settlers purchased Section 25, and organized the Munjor Land Company, which in 1882 was superseded by an incorporated organization, the Munjor Town and Grazing Company. Part of the section was surveyed for a town site, and each lot holder became a member of the company, which started business with a capital stock of $10,000 - 200 shares at $50.00 per share. Among other things, the charter provided that the company have a board of directors made up of five members, a president, a vice-president, a secretary, and a treasurer, all to be chosen from the members of the company; that no portion of the land holdings could be burdened with debt, transferred, or sold without the consent of two-thirds of the shareholders. The by-laws provided for quarterly meetings, and an annual election of directors.

Unfortunately , the settlers were incapable of properly handling the affairs of such a corporation, and the result was a long series of accusations and quarrels which split the town in half. After a futile attempt to settle matters in the courts, the two contending parties came to an agreement, the Munjor Town and Grazing Company was dissolved and peace and harmony restored, to the relief and joy of all concerned.

Munjor remains a small, unincorporated village that is a deeply religious, highly industrious, and extremely progressive that continues to display an intense pride in their heritage.

Volga-Germans are in an enviable position genealogically speaking. While they were in Russia and after the move to Kansas, people did not marry outside of their communities, even if the villages were within a few miles of each other. In researching my Befort line I found this to be true. the only place you'll find them for 100 years is in Munjor, Ellis County, Kansas.