I am a member of the El Toyon Chapter, National Society Daughters of the American Revolution.  I currently serve as the registrar - a postion I have held since 2007.  El Toyon is 119 years old, the 3rd oldest active chapter in California.  An ongoing project of mine has been to research the lives of the 25 charter members and their families.

In my effort to collect photos of each of the charter members as well as all the past regents of our chapter, I came across this drawing by Ralph Yardley in one of our chapter scrapbooks. 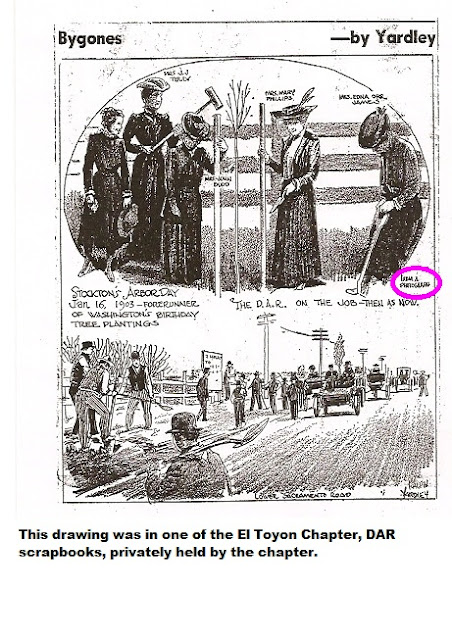 In my search for the newspaper issue that the drawing appeared in - which I have not found yet - I came across two articles that described what was going on in the drawing.

Looking at the drawing more carefully, three little words caught my eye:  "From A Photograph." 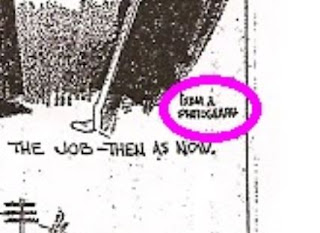 This research was done over 5 years ago and yes, I did find the photograph that served as the model for the drawing.  But I am embarrassed to say that I have no idea where it came from.  My best guess is that I obtained a copy of it from the Bank of Stockton Historic Photograph Archive.

This local gem of a repository includes more than 32,000 photos spanning 150 years, some dating back to the 1850s.  The bank began collecting photographs in 1990 with the purchase of local photographer Leonard Covello’s collection, which included prints from numerous other pioneer photographers including Batchelder, Spooner, Wells, Logan, and others, totaling more than 20,000 photos and negatives. The bank has since extended its collection tremendously, creating a computerized catalogue and making it available to the public with the help of historians from University of the Pacific and Bank Archivist Bill Maxwell. 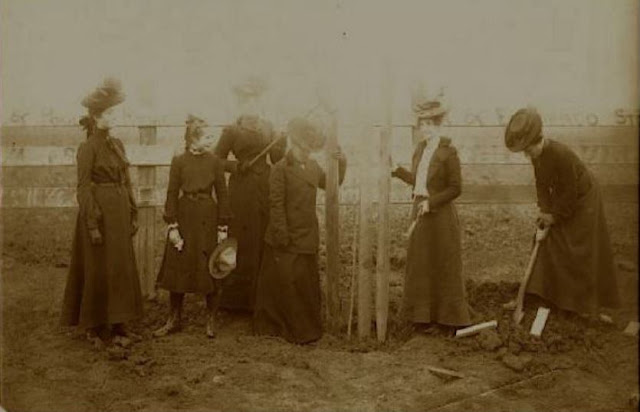 4th from left is Mrs. John Budd.  Mary Emelia Haste married John Elliot Budd.  John's father was Judge Joseph Budd and his brother was James Herbert Budd was the 19th Governor of the State of California

The woman on the far left and the young girl standing next to her have not been identified.

To read more about the talented Mr. Yardley click HERE and HERE.

I am a volunteer for the San Joaquin Genealogical Society.  I am in charge of their First Families Program and Research Requests.

Recently, I received a request from a gentleman in Germany.  He had an old family photo album that had some photos with the words "Stockton, Calif." written on the back.  He asked if it would be possible to identify what was going on in the photos. 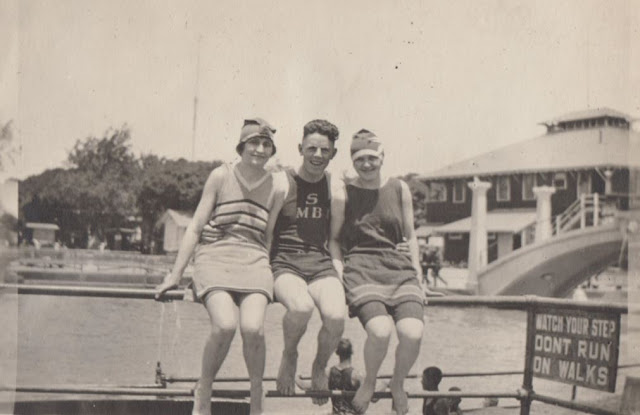 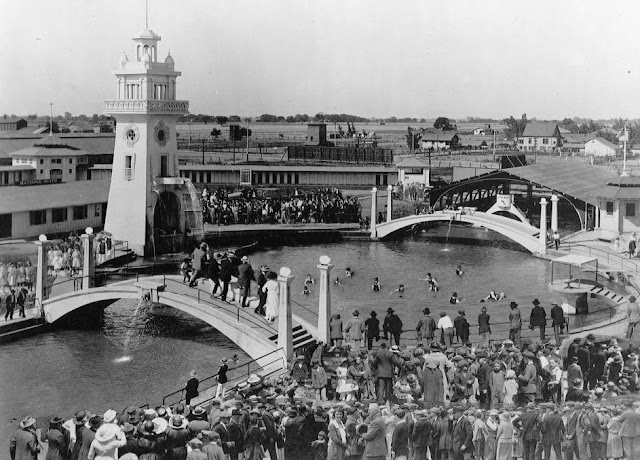 Stockton’s most famous mineral baths were the Jackson Baths built in 1893 at the present location of McKinley Park. Three wells supplied water to one large pool and several smaller pools which were surrounded by swings, a trapeze, slides, springboards and 150 dressing rooms. The facility included twelve bath houses for private parties, a clubhouse for entertaining and a grand stand for musical concerts. The thirteen acre resort destination also featured lawn areas with picnic tables and barbecue pits, and even a small zoo and a scenic railway. Renamed the Stockton Mineral Baths after substantial renovations in 1920, the expanded pool became the largest swimming tank in the world with a central circular pool with two wings. Renowned architect Glenn Allen designed the four-story lighthouse tower with a statuary and fountain at its base, two Venetian bridges at either side of the circular pool and several slides and waterfalls. Private pavilions, wading pools and sandy beaches made all this Stockton’s most popular attraction of the time. Unfortunately, these wells dissipated by the 1940s.

The other photo is of a parade.  The woman in front is holding a sign that reads "Joan of Arc Society." 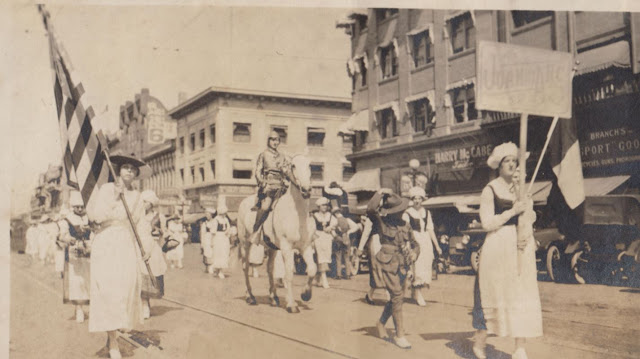 I went to the newspapers for help with this photo.  I quickly found what I was looking for in the Stockton Daily Evening Record for 8 June 1918 on page 16. 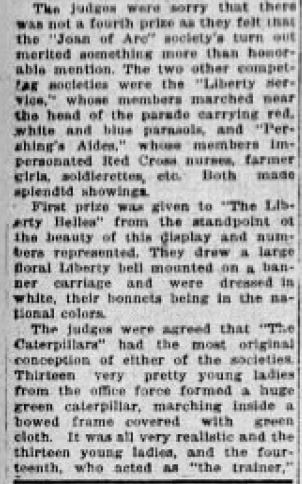 San Joaquin County and the Spanish Influenza Epidemic of 1918

In the spring and summer of 1918, Stockton newspapers were reporting on the Spanish Flu in Europe. One or two lines buried in the back pages. The top stories of the day at that time were about allied victories during WWI. Starting in September of 1918, those one or two lines of print grew to one or two paragraphs. As the days went by, front-page articles were printed daily . What follows is an incomplete timeline of how the Spanish Influenza spread through San Joaquin and other counties in California as gleaned from local newspapers.


28 May 1918 - Epidemic in Madrid - "Business life in Madrid is almost paralyzed by the outbreak of a species of influenza. The exact nature of the disease has not been determined."

5 June 1918 - A newspaper article suggests that a German submarine carried disease germs into Spain which has caused the strange epidemic similar to the grippe.

27 June 1918 - "Influenza is now epidemic all along the German front. Special hospitals are being established to deal solely with this disease of the new Spanish type. It is presumed to have been brought to the trenches by men returning from their leave."

18 September 1918 - A small paragraph in the Stockton Daily Evening Record reported that 20 have died in Boston and have 200 new cases of the influenza.

21 September 1918 - "No Influenza on this Coast So Far" Dr. George Ebright, president of California State Board of Health said, "Epidemics of this nature usually follow the line of railroad travel. It may appear here within two weeks."

27 September 1918 - The government has posted notices asking the public's help to prevent the spreading of the Spanish Influenza by using a good throat gargle every morning and evening and a nose wash of a weak saline solution two or three times a day.

28 September 1918 - "Influenza Found in San Francisco and Waterford" - 8 cases were reported to the San Francisco City Board of Health. William P. Felker, wife, daughter and two sons from Waterford (12 miles east of Modesto) have the Spanish Influenza. The family had been in Havana, Cuba, came through New Orleans with many soldiers on the way to the Presidio. The family has been placed in quarantine in their home. 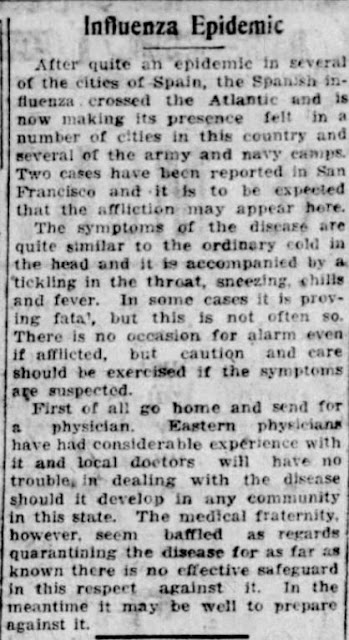 3 October 1918 Washington D.C. is taking steps to prevent the spread of the Spanish Influenza - all schools have been closed and theaters might be next. 11 deaths so far in the city.

7 October 1918 - In Redding 22 cases of the Spanish Influenza have been reported and one death - Edmond A. Brouiliard age 36.
7 October 1918 - One family member that was quarantined in Waterford on September 28th has died - Albert Felker age 19.

8 October 1918 - "Stockton is one of the very few cities of importance in California that has not been visited by the influenza. Redding has 23 cases, Oakland has 10 cases, San Francisco has 36 cases, Los Angeles has 31 cases and Ukiah has 5 cases. The Sherman Institute - an Indian school in Riverside County has reported 160 cases. 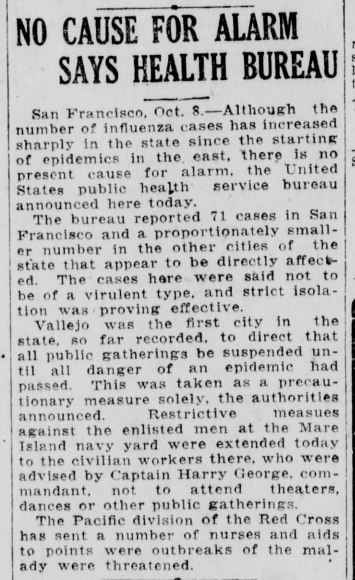 11 October 1918 - San Francisco has 266 cases, 113 of them reported in the last 24 hours.
11 October 1918 - The Red Cross in Stockton is offering a free course in hygiene and the care of the sick. It is very important that women in every household should be prepared to meet an epidemic.

16 October 1918- In Stockton, theaters and places of amusement are ordered closed until further notice. As of Tuesday evening 29 cases and as of one hour ago 94 cases. Symptoms are: headache, backache, fever, sharp pain in the chest and sore throat.
16 October 1918 - San Francisco reported 384 new cases and 4 deaths bringing total to 1388. Fresno reported 59 new cases bringing total to 220 and 6 deaths.

17 October 1918 - Kern County has reported 276 cases and 3 deaths
17 October 1918 - In Stockton 250 cases and 4 deaths. Public schools are now closed as are church services and all public meetings. Arrangements have been made by the city of Stockton and County of San Joaquin to jointly finance whatever expense is involved in giving the best service possible to those unable to buy medicine or have a regular doctor.

19 October 1918 - The Red Cross in Stockton is hiring women to care for children of those who have the influenza. The pay is the same as a nurse's aide - $30 per month. They also are hiring practical nurses - $50 per month and trained nurses $75 per month.
19 October 1918 - San Francisco reports 4430 new cases for the week ending October 19th.

26 October 1918 - Ordinance is passed in San Joaquin County requiring everyone who goes out of their home to wear a mask. 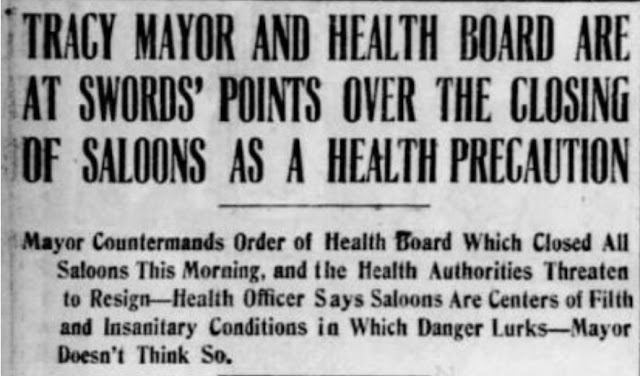 15 November 1918 - Dr. Fred Clark, superintendent of the Stockton State Hospital, said a soldier from Camp Fremont brought the influenza to the male part of the hospital. He was isolated but not before he had infected others. Of the 2500 patients at the hospital, there are 490 cases of influenza and 55 deaths. 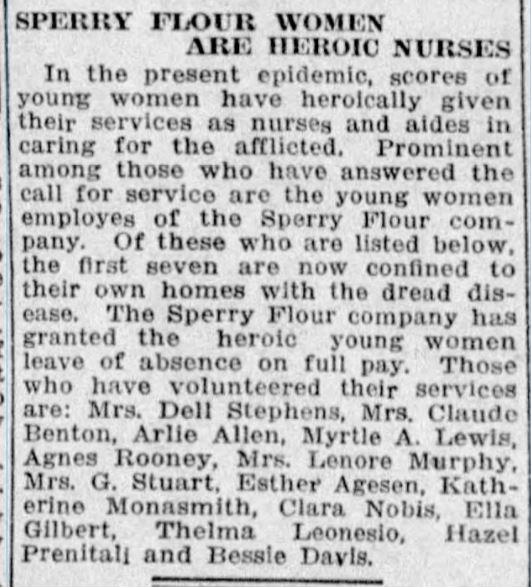 4 December 1918 - "Influenza Reports Increase for Day" - 41 new cases reported in Stockton yesterday. Only 20 the day before.

5 December 1918 - Washington DC reports that since September 15th there have been 350,000 deaths in United States. Stockton reports 43 new cases.

8 December 1918 - Stockton reported 86 new cases and 1 death. The public will have to wear masks again.

14 December 1918 - Stockton passes an ordinance enforcing isolation - "It shall be unlawful for any person within the City of Stockton suffering from Spanish Influenza to go outside his place of residence until the physician attending him discharges him as cured. Additionally, there must be a sign posted at the entry to residence stating "Spanish Influenza Here"

20 January 1919 - San Francisco reports that 87 people have been arrested today for not wearing a mask.

28 January 1919 - Stockton reported 10 new cases. If the situation continues to improve, all bans will be lifted soon.

3 February 1919 - All schools in San Joaquin County have re-opened.

7 February 1919 - The mayor of Stockton proclaimed at 10:10 AM that the epidemic of the Spanish Influenza has ceased to exist.