Big and Fun News From MyHeritage! 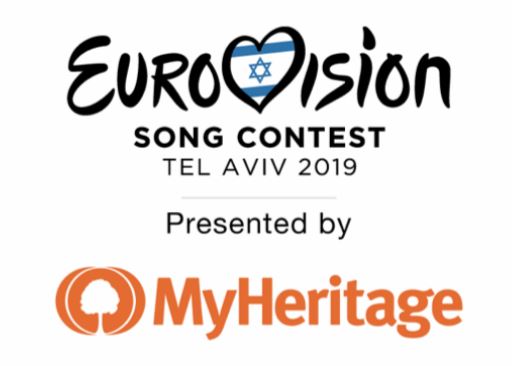 MyHeritage has been announced today by the European Broadcasting Union (EBU) as Presenting Partner of the Eurovision Song Contest 2019! As the event’s main sponsor, MyHeritage has been granted extensive global association and event, media, and digital rights for the upcoming song contest.

The Eurovision Song Contest is a famous international song competition held annually since the 1950’s, primarily among the member countries of the European Broadcasting Union. It is the world’s biggest live music event, a hugely popular television event that has been watched live by an average of close to 200 million people in the past 3 years. The contest is hosted by the previous year’s winning country — as Israel won the 2018 competition, Eurovision 2019 will be held in Tel Aviv.

Some past winners of the Eurovision Song Contest:

So I am back to extracting genealogical information from the California State Statutes.  I am in the year 1895 and it is mostly all payments made by the State of California to individuals.  As usual, one catches my eye.  Mostly because it is a payment to a woman and the amount of the payment - Mrs. Addie McGinnis for $7500.

So off I go, to ask The Google why Mrs. McGinnis is getting $7500 from the State of California.

At first, all I find is that the payment is compensation for the death of her husband who was "killed while hunting the reward for the capture of Evans and Sontag."

Clickity-clack, clickity-clack and it is now 3 in the morning.  HOWEVER, I now have the story.

In August 1892, George Constant, John Sontag and Chris Evans, using sticks of dynamite, held up a train near Visalia, California and made away with over $10,000 in gold and silver coins.  They shot Visalia Deputy George Witty and then escaped in the deputy's buggy.  This triggered a large possee to come after the desperados.  The train robbers were tracked to a cabin and as the lawmen approached, the robbers opened fire killing Andrew McGinnis. 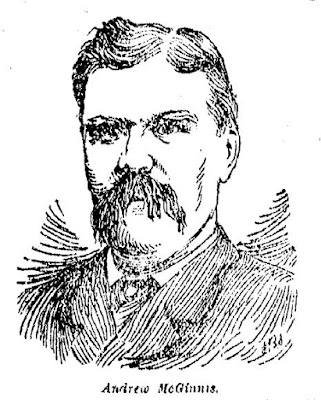 McGinnis had just moved to San Francisco with his wife and daughter in February of that year from Modesto, where for eight years he had held the position of Deputy Sheriff.  After moving to San Francisco he had found employment at Friedlander Cigar Manufacturers.  When the possee was forming, the Southern Pacific Railroad asked his assistance due to his reputation as an efficient and intelligent officer.  He was sworn in as a Deputy U.S. Marshall the morning the possee left to find the robbers.  In a weird coincidence, McGinnis had at one time worked as a bill collector for Sontag and Evans when they owned a livery stable in Modesto.

Addie McGinnis left San Francisco and went to Modesto to bury her husband at Modesto Citizens Cemetery in Stanislaus County. A little less than a year later, Sontag was killed and Evans was apprehended after a gun battle with a posse. Evans lost an eye and his right hand in the fight.  Chris Evans was convicted of the murder of all three officers and sentenced to life in Folsom Prison. He was paroled in 1912.

"Whatever happened to the Widow McGinnis and her daughter?", you ask.  Well, I caught up with Addie McGinnis in 1900.

Addie McGinnis, age 45,  had moved to Stockton (of all places)  and was working as an attendant at the Stockton State Insane Asylum.  Daughter Etta May McGinnis was attending dental school.  Ten years later finds them both in Oakland, Alameda County working as dermatologists.  Sometime before 1920, Etta May McGinnis married Jeremiah Denahy and she and her mother moved in with him.  Jeremiah was the owner of a dancing academy in Oakland.

Owning a dancing school must have been good business because the Denahy's purchased a home valued at $3000 and all three lived in the house until their deaths.

There are no living descendants of Deputy Marshall Andrew McGinnis.  I am telling his story here so he will not be forgotten.

Did you know that the Library at the National Society Daughter of the American Revolution has an archived lecture series that is absolutely free to anyone?  All the presenters are librarians or genealogists at DAR and there is a wide variety of topics to choose from.

This is a must to have on your list of genealogical education opportunities.

"1777: Tipping Point at Saratoga" by Dean Snow
"Testing the American Way of War" by Edward G. Lengel
"The Swamp Fox" by John Oller
"Confounding Father" by Robert McDonald
"Abductions in the American Revolution" by Christian M. McBurney
"American Icarus:  A Memoir of Father and Country" by Pythia Peay
"Federal Style in the Federal City" by Ann Wass
"Washington's Circle" by David and Jean Heidler
"The Grand Forage 1778" by Todd W. Braisted
"Using Maps in Historical Research" by Charlie Grymes