This project has been a long time in coming.  I don't usually like to toot my own horn, however - TOOT, TOOT, TOOT!
I have worked for over a year to make this happen.  Many thanks to Dave Stuart (CEO) and Leigh Johnsen (Archivist) from the San Joaquin Historical Society and Jacqi Stevens and Harvey Williams from the San Joaquin Genealogical Society.  The project wouldn't even have got off the ground if not for these wonderful people.

There are three categories of First Families that your ancestor may qualify for:

We hope to identify pioneers and early residents and to honor their lasting contributions to the history of San Joaquin County by recognizing their descendants who submit genealogical information.

All applications and documentation submitted will be housed in the San Joaquin County Historical Museum Research Library to preserve your family's history and will be made available for public research.

For each qualifying ancestor, an 8 1/2” x 11” certificate, suitable for framing, numbered and signed, will be issued.   $10 for members of the San Joaquin Genealogical Society or San Joaquin County Historical Society; $15 for non members.

"The Most Beautiful Woman in California"

This statement was quoted in the San Francisco Call (23 November 1908) from the artist Charles Dana Gibson (Gibson girls) when he saw Anna Delpino Peters at the Fairmont Hotel in San Francisco. 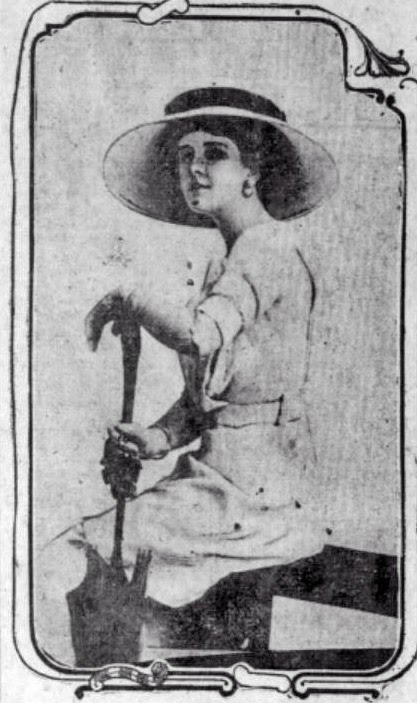 Anna was one of the charter members of El Toyon Chapter, National Society Daughters of the American Revolution.  Anna's mother, Anna Forman Peters was the organizing Regent.  Anna's sister, Genevieve Peters was also a charter member.

Anna Forman Peters was the wife of J.D. Peters one of the wealthiest men in San Joaquin County.  He was a grain merchant, banker, land developer and owner a fleet of steamships.  Their children, J.D. Jr., Genevieve and Anna, spent much of their teen and young adult years back and forth between Stockton and San Francisco.  They were part of what was then called “The Smart Set” - people who were among the very wealthy and were socially prominent.

Genevieve, though maybe not quite as pretty as her sister Anna, held her own when it came to popularity amongst her peers. 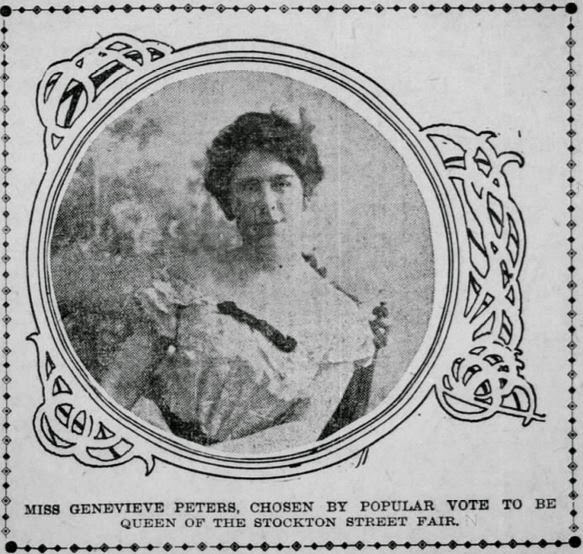 Genevieve was engaged to be married to a man named Arthur Duncan.  One week after the date to be married was set, she broke off the engagement citing religious differences.  The same evening she attended a dinner that was held in honor of the broken engagement.  Exactly one year later, she married Dr. Clarence Logan Six and they had three children:  John Logan Six, Robert Forman Six and Genevieve Six.  Robert Forman Six was the CEO of Continental Airlines from 1936-1981.  He was married twice, both times to actresses – Audrey Meadows and Ethel Merman.  Genevieve Forman Peters Six died at the age of 48 on 17 May 1926 in Stockton, San Joaquin County, California.

While working as a volunteer in a San Francisco hospital, Anna Peters met James Callery Jackman.  James was a Captain in the Marine Corp and was hospitalized from being gassed during World War I.  Anna nursed him back to health and they were later married.  They did not have any children.  Anna DaPino Peters Jackman died at the age of 88 on  15 June 1974 in Santa Clara County, California.

The only son in the family, J.D. Peters followed in his father's footsteps and was a successful grain merchant and land developer.  He married Jessie Fillmore and were very happy until the year 1908.

All the staff involved were fired immediately from their positions.  To this day, the crime has never been solved.
No comments:

This One Should Make You Chuckle

So I came across this article I wrote for "The Catholic Gene" blog back in 2011.  It really is way too funny not to share it with you here.  So for those who may have missed it 4 years ago - 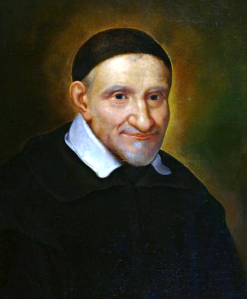 For my first post to The Catholic Gene I am going to tell you about St. Vincent de Paul. I have to tell you that there is more to this guy than meets the eye. Just look at that face – that twinkle in his eye. There aren’t many portraits of Saints that make me smile like this one does. He even died with a smile on his face. You can see for yourself the next time you’re in Paris. Just go to the Vincentian Chapel at Rue de Sèvres and have yourself a visit with St. Vince. Maybe he looks happy because he didn’t die a gruesome, horrible martyr’s death. 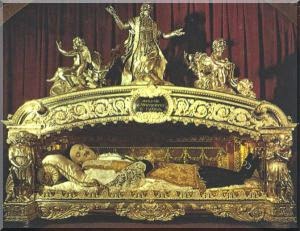 The boring hard facts are that Vincent de Paul was born at Pouy, France on April 24, 1581. He was ordained a priest on September 23, 1600. Vincent devoted himself entirely to works of charity. Vincent died in Paris on September 27, 1660 and was canonized in 1737.

In 1633 he founded the Sisters of Charity who wear the coolest habits and coronets. 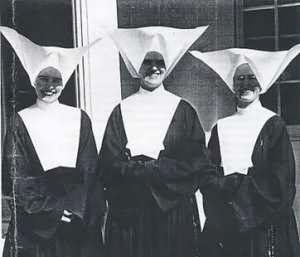 I’m certain that it was this order of nuns, the Sisters of Charity, that TV Land had in mind when they created The Flying Nun. I think I will contact the Pope and petition for another cause for St. Vincent for surely he is the patron saint of flying nuns as well. 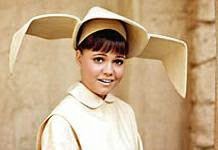 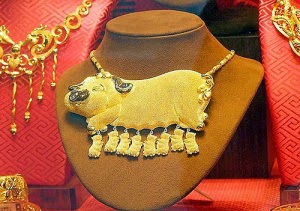 Disturbing, yet hideously tacky in a delightful sort of way

Thank you St. Vincent, you’re my kind of saint!
No comments:

March is Women's History Month and I have a story for you.

An ongoing project of mine is researching the charter members of my DAR chapter here in Stockton, California.  The ladies who organized the El Toyon Chapter were considered "High Society" and as such they were constant fodder for newspapers. 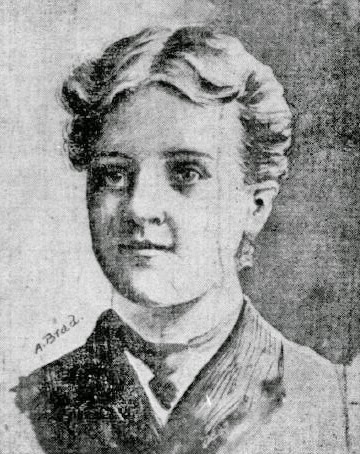 Take the case of Mary Ada Fraser, daughter of Philip Barry Fraser, who was president of the Farmers and Merchants Bank.

In 1898 Mary's mother died a tragic death.  It seems that Annette Parker Fraser had been standing to close to the fireplace when her dress caught and she went up in flames.

When in 1900 her father remarried a young widow, it seems Mary objected strongly to this marriage and started acting out perhaps to embarrass her father, punishing him for remarrying. Her behaviour was such that one night at midnight the asylum carriage, attendants with straps and handcuffs, took Miss Fraser from her home to the madhouse.

From the Stockton Independent Daily:

A father and brother seemingly bending every influence which money and position can exert to keep a girl in a madhouse and the State Insanity Commissioners apparently striving to keep the public in ignorance of the facts, is a summary of the investigation conducted by the State Insanity Commissioners into the case of Mary Fraser, now restrained of her liberty at a private insane asylum.

The investigation which was begun yesterday at the instance of the girl's cousin, Mrs. James, has developed into a star-chamber proceeding, astounding in nature and apparently one-sided in its effects.  The friends of the unfortunate girl wanted the testimony taken down in shorthand in order to use, if necessary, in court proceedings.  This was denied them.  when the principal witnesses - those who could impart relevant testimony - came from the star-chamber, they announced that they had been solemnly sworn to secrecy.  News of this procedure has served to set public sentiment against P.B. Fraser, the father, and Albert Fraser, the brother.  The question naturally is asked "If there is nothing to conceal, why this secrecy?

It is understood  the distinct conviction of the commission is that the girl, on account of her eccentricities, as developed during the investigation, was a proper subject for parental watchfullness and even restraint.  However, these matters are regarded as outside the scope of the commission.  Local attorneys have raised the point that the Lunacy Commission has no jurisdiction in such cases but insist that the matter should have been brought before the Superior Court on habeas corpus proceedings and a jury should decide whether or not the patient is insane. The Commission takes the opposite view of the case and sections of the California Insanity Law of 1897 that state that the Commission has authority to discharge a patient are quoted to uphold its actions.


From the evidence gained by the Lunacy Commission in its secret session, it was learned that Miss Fraser had fallen into habits of extravagance only possible from one of unbalanced mind:  that she had in one year contracted bills for underwear alone amounting to $1500, that she had persistantly disobeyed her father.  The members of the Commission believe that Miss Fraser is of a highly nervous disposition that she has been very much unstrung and that she should properly be placed under a certain degree of restraint.  The action of the State Commission in Lunacy had found that P.B. Fraser, the father of the young woman has acted rightly in detaining her but she should not be placed in an insane asylum - a partial victory for both sides in the controversy.

So after all this, Mary's father still retained guardianship over her.  Philip Fraser went to the asylum and tried to convince his daughter to be transferred to another sanatorium in Pacific Grove. She flatly refused and told her cousin and aunt of her father's plan.

They retained the legal services of Ex-Governor of California, James Budd (who happened to be the son of Joseph Budd, the presiding judge over the matter) and a writ was served on Fraser and the asylum which compelled them to produce Miss Fraser in court the following morning.


The option of receding from their position or defending it in court put a new phase upon the case and changed any plans which the father and brother may have previously formed.  Fraser agreed to relinquish his guardianship in favor of Mrs. R. B. Parker, the girl's grandmother and that it was understood that there would be no opposition to the young lady's competency.

Judge Joseph Budd declared in court the next day:

"Mary A. Fraser, was not, and never was an insane person.  The true cause of her dentention was the tyrannous determination on the part of P.B. Fraser, her father and Alfred P. Fraser, her brother, to forcibily compel her to conform to their wishes in the matter of certain family differences.  She was imprisoned for the purpose of discipline and revenge."

This incident divided the socialites, with the majority of them sympathetic towards Mary Fraser. Some of the prominent society people subpoenaed for the investigation to testify in Mary's behalf:

Miss Mabel Clary (her brother was a law partner with Alfred Fraser, brother of Mary Fraser)