The Power of a Community and Social Media

I live in Stockton, California.  The City of Stockton, for the most part, doesn't ever get good press.  It has been said more than once - "No one comes to Stockton on purpose."

Well just this week a very good thing happened.  A mysterious appearance of a headstone in the parking lot of a local tire shop brought different people from the community together to return the headstone where it belonged.

A City of Stockton work crew, a city inspector, a community service officer with the Stockton Police Department, a member of the San Joaquin Genealogical Society and the Facebook group called Stockton Memories.  They all worked together to solve the mystery.

You can read the story HERE.
No comments:

UPDATE:  Judy Russell, The Legal Genealogist, was kind enough to answer my questions regarding the status of Elizabeth Hobrock Borgstadter's citizenship.  Scroll down and read her comments.  Thank you Judy!

I recently wrote about my 2nd great grandfather Fred Borgstadter and my quest to determine whether he became a U.S. citizen before he died in 1929.  You can read about it HERE.  Go ahead and click over and read the short post so you are up to speed and can follow along with my new puzzle.

The other day, I came across a post from Jennifer Holick who shared a story from the Los Angeles Times about a man who is trying restore his grandmother's U.S. citizenship posthumously because it was taken away from her  when she married a man who was not a U.S. citizen.

After reading the article I wondered if my 2nd great grandmother, Fred's wife,  had her U.S. citizenship restored before she died in 1932.

Here is what I know for certain: 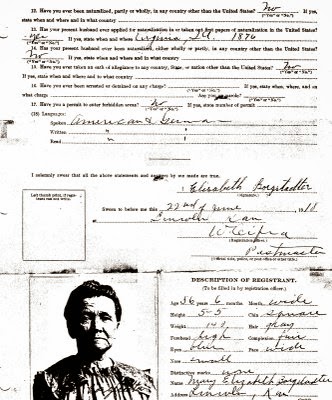 Fred Borgstadter filed a Petition for Citizenship on 12 February 1921 and on 18 May 1921 signed the Oath of Allegiance and became a U.S. Citizen.  But what about Elizabeth? 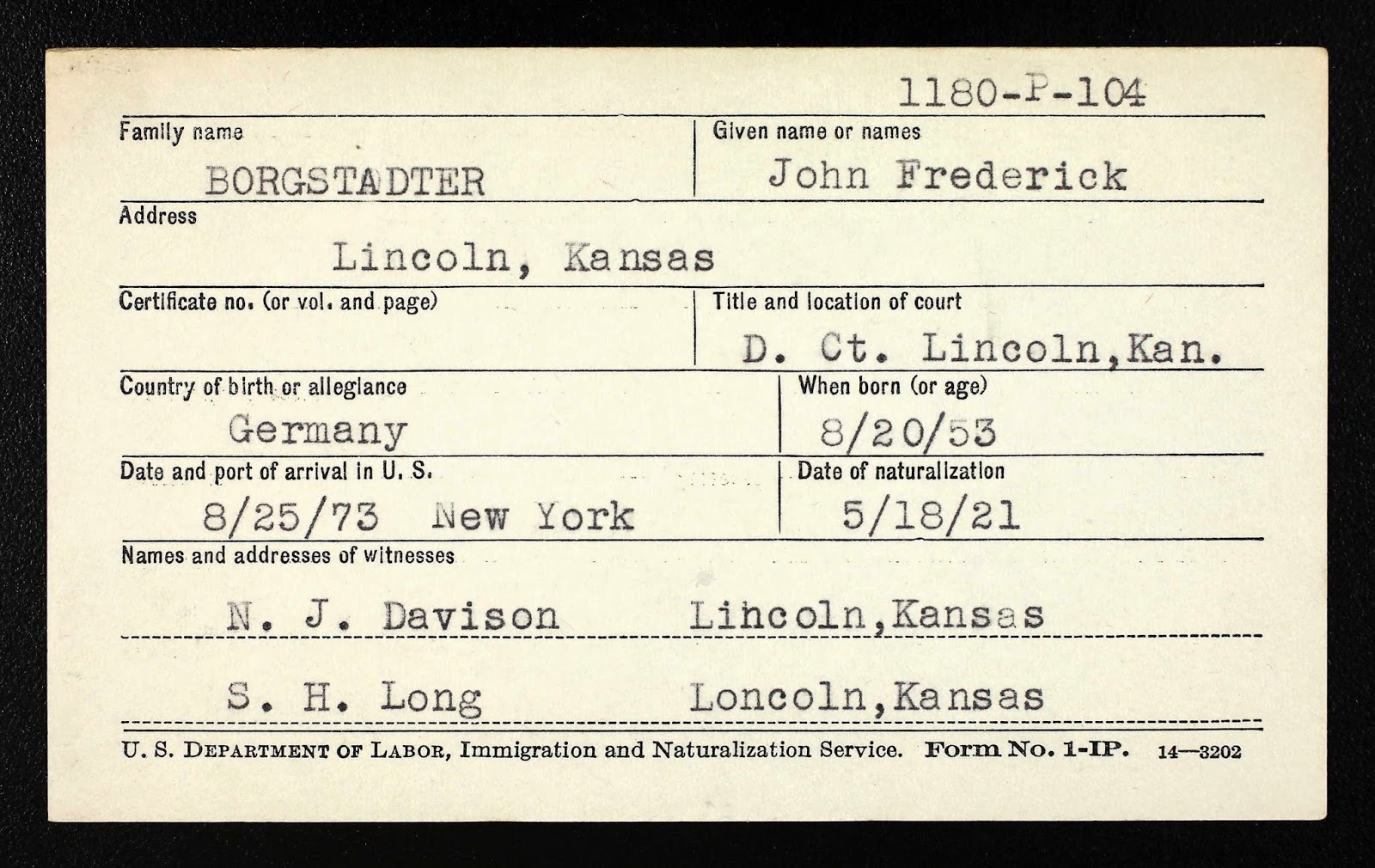 So in 1907 Elizabeth lost her U.S. citizenship.  Can you imagine what she must have felt when that law was enacted?  By 1907 she and Fred had been married for almost 30 years, had 4 children and had moved to Lincoln County, Kansas where they were farmers and well known and respected in their community.

Ten years later in 1917 - to add insult to injury - they are both required to report to the U.S. Marshall.  They fill out a long form, are fingerprinted, have a "mug shot" taken and are issued ID cards they they must carry on their person at all times identifying them as enemy aliens of the United States.

When Fred was naturalized in 1921, Elizabeth was legally an alien also.  Was her citizenship restored to her when Fred became a citizen?  Would there be a record of that somewhere?

The 1907 Expatriation Act was repealed in 1922 by the Cable Act.  This was also known as the "Married Women's Act," and three important changes were made:

If Elizabeth had her citizenship restored to her through this act, there would have been a court record.  Women who lost citizenship by marriage and regained it under Cable Act naturalization provisions had to take the Oath of Allegiance and file it in any naturalization court--regardless of her residence.

The Cable Act was amended in 1931, allowing females to retain their citizenship, even after marrying "aliens ineligible for U.S. citizenship.  So was her citizenship restored to her under this act?

So the questions I am looking to answer are:

Is there a record from 1907 showing that Elizabeth's U.S. citizenship was taken away from her?

Was her citizenship restored when Fred became a citizen in 1921?  If so then would there be a document showing that?

If  it wasn't restored when Fred became a citizen, then when and under what law was it restored to her?

Elizabeth died in 1932.  I hope that she didn't die without her U.S. Citizenship rightfully restored to her.


Judy G. Russell said...
>>Is there a record from 1907 showing that Elizabeth's U.S. citizenship was taken away from her?

It's called "a marriage certificate." Seriously. The instant she married a non-citizen, she automatically lost her US citizenship under the Expatriation Act of 1907 (34 Stat. 1228, section 3 ("any American woman who married a foreigner shall take the nationality of her husband").

>> Was her citizenship restored when Fred became a citizen in 1921?

Yes, automatically on his naturalization. Well, not exactly restored; she was considered naturalized (so it wasn't restoring her native-born citizen status).

>> If so then would there be a document showing that?

Nothing except his naturalization certificate.

There's a wonderful two-part article in Prologue, the magazine of NARA, written by Marian Smith of USCIS on this. It starts here  and is well worth reading.

Judy G. Russell said...
Let me throw in one more wrinkle here: the actual fact is that Elizabeth never did lose her citizenship. The courts eventually decided that the 1907 act only applied to women who married after 1907. But it was an open question for a long time, many people (including courts and government officials) interpreted it as applying to any woman who ever married a non-citizen, and Fred and Elizabeth may have simply assumed that Elizabeth also had to register as an alien. But in reality, given the way the law was ultimately interpreted, the fact is she never lost her citizenship.
11 comments: 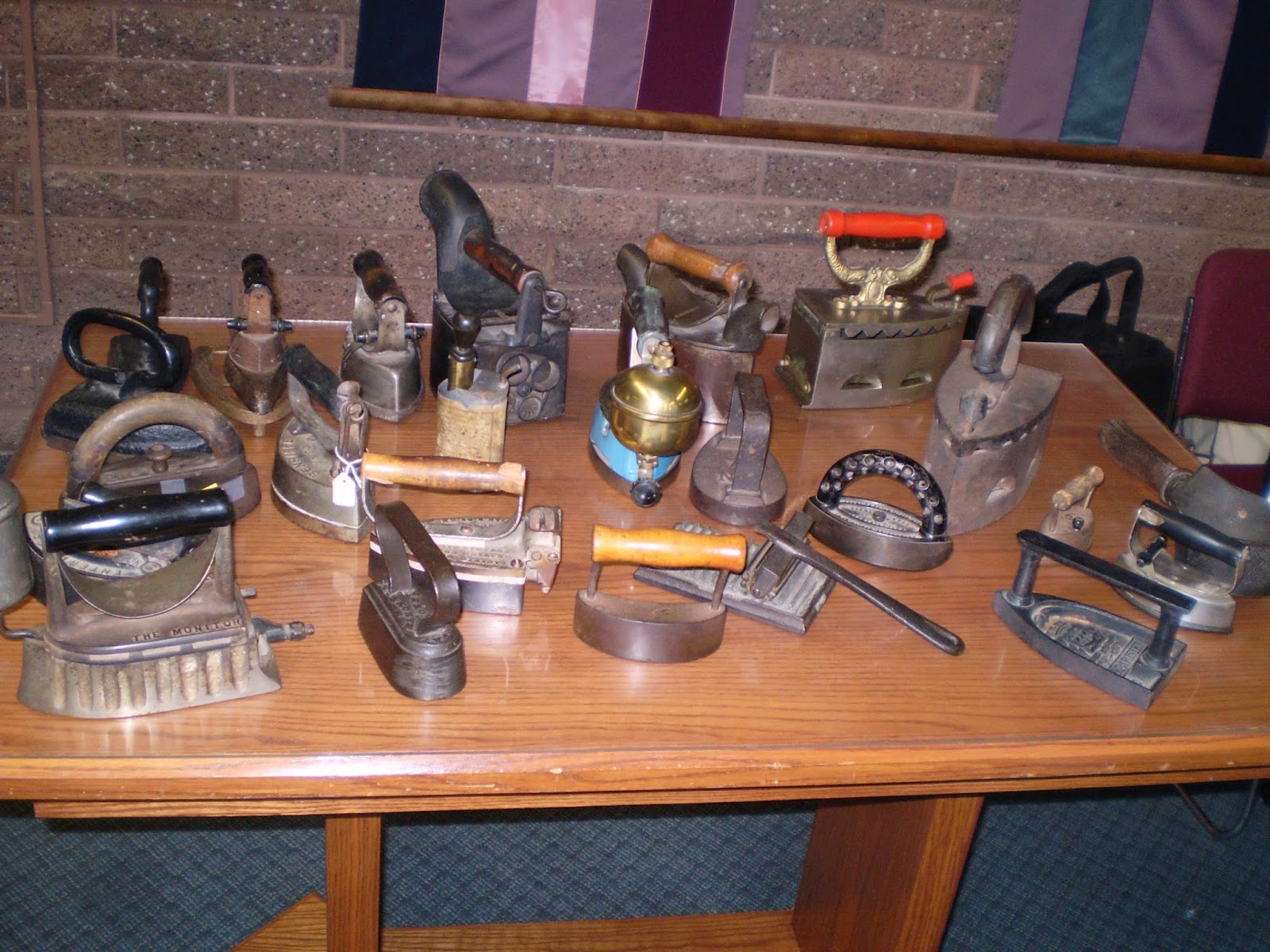 Last Saturday my DAR chapter had a wonderful program given by one of our own chapter members.  She brought to the meeting a small portion of her antique pressing iron collection.  She had been all over the world in her earlier traveling days and always seemed to find an iron where ever she went!

I am here to tell you that our female ancestors were not wussies.  Those irons weigh on average 5 to 9 pounds each.  Can you imagine what it must have been like for them?

For most households, one entire day (usually Monday) was devoted just to do the washing.  Water was heated in large copper pots and clothes were boiled.  Those heavily stained were rubbed with soap and scrubbed on a washboard.  After rinsing the clothes in yet another large pot of boiling water, they were fed through a hand cranked wringer then either spread on bushes or hung on a line to dry. 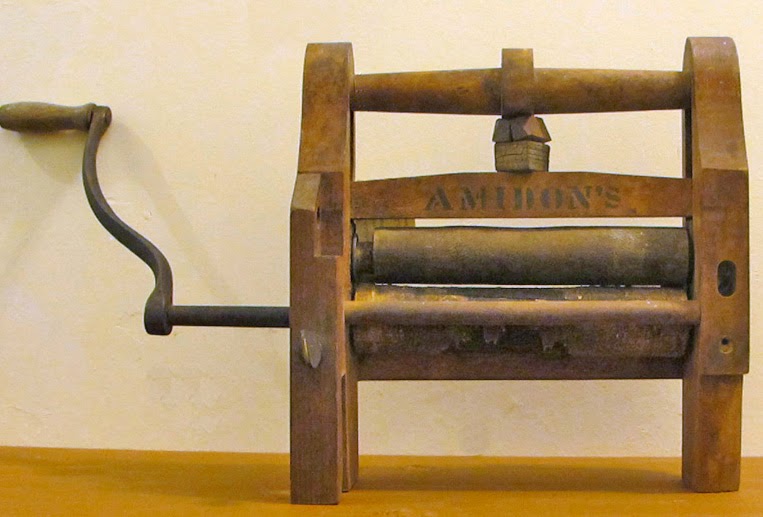 Although wash wringers had become common in middle class households, they were relatively easy to manufacture, and competition was stiff. The much-advertised Universal Clothes Wringer, marketed by Julius Ives & Company in New York City, outsold the one manufactured by Gunn, Amidon & Co. nearly two-to-one.   Gunn, Amison & Co. came up with a new and improved version.  Some advertising genius had the idea to place "odes to the new wringer" in newspapers all over the country.  Here are a few examples:

"The rich and the poor, may every one try it,
For the pitiful sum of eight-fifty will buy it,
When you’ve used it yourself for many long years,
You can leave it your daughters, the charming young dears."

Anyway, back to irons.  Like the washing, an entire day (usually Tuesday) was also devoted to ironing.  Most households used heavy flat irons, forged by the local blacksmith.  Also referred to  as "sad" irons, these flat irons are often  shaped like a triangular to make it easier to iron around buttons. These were heated on an open fire or a stove, and the metal handles had to be grasped with a thick potholder.

In 1870, a woman by the name of Mary Florence Potts, in Ottumwa, Iowa, was awarded a patent for a sad iron with that came to a point on both ends, which allowed women to iron in either direction.

Just a year later, she introduced the biggest change ever in the history of ironing:  a sad iron with a detachable, wooden handle. They were sold in sets of three irons and one handle, the idea being that two irons could be heating on the stove while one was in use.

Here are a few books that I enjoyed to learn more about this subject:

Mechanical Brides: Women and Machines from Home to Office
By Ellen Lupton 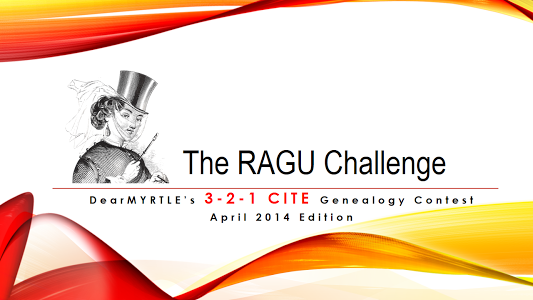 Dahling Dear Myrtle has come up with a fun contest that will help hone your citation writing skills and your evidence analysis thought process.  She calls it "The Ragu Challenge 3-2-1 CITE!"  Please click on the link and read all about it.  Myrt even made a short 10 minute Google+ Hangout video to explain it all which you can view HERE.

The rules are very simple:  Use 3 documents and write 2 paragraphs about 1 event AND YOU MUST write citations for your sources.

For my entry, I am going to interpret the "event" as a research question.

The research question - Did John Fred Borgstadter become a naturalized citizen of the United States before his death on 5 March 1929? 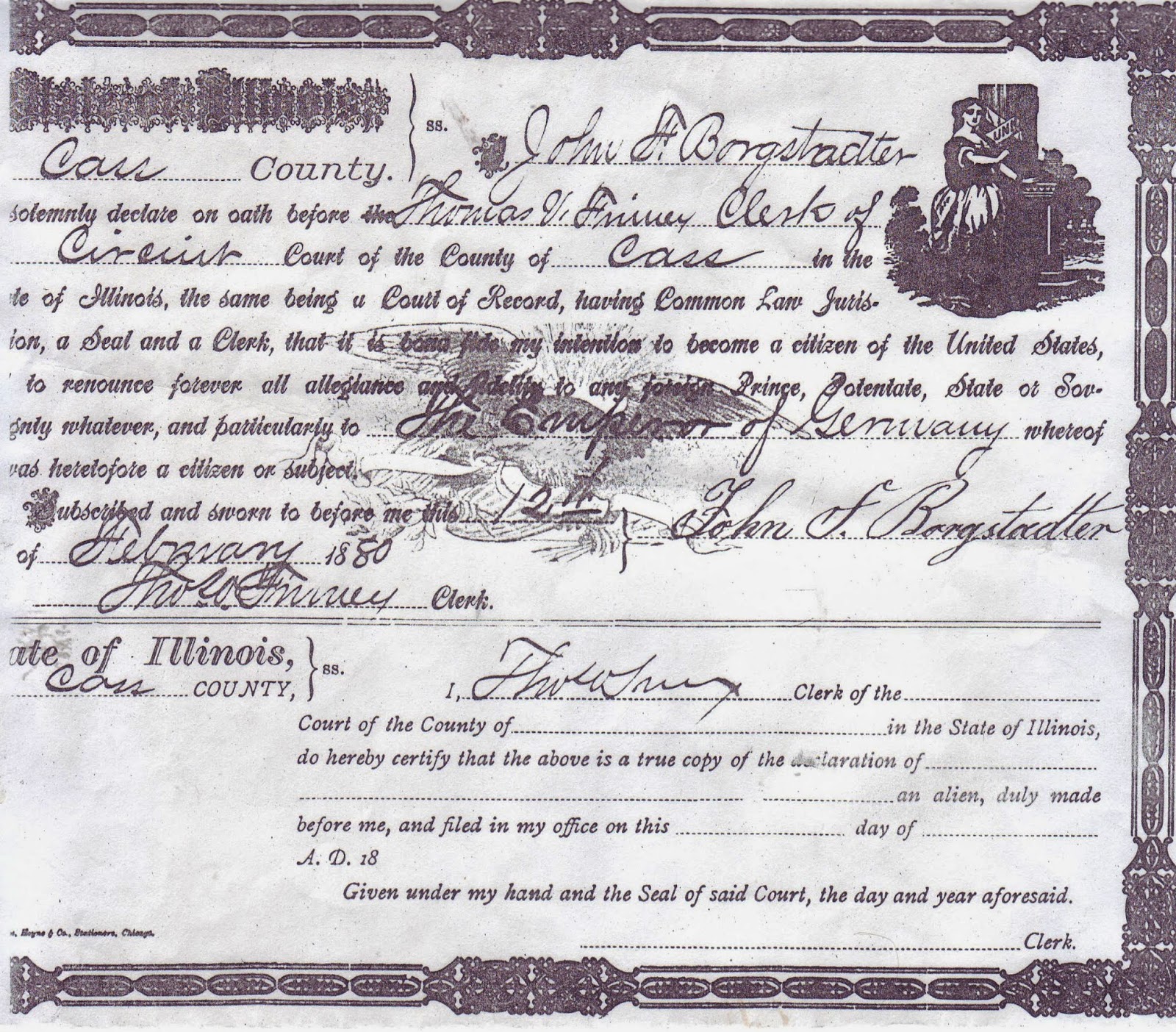 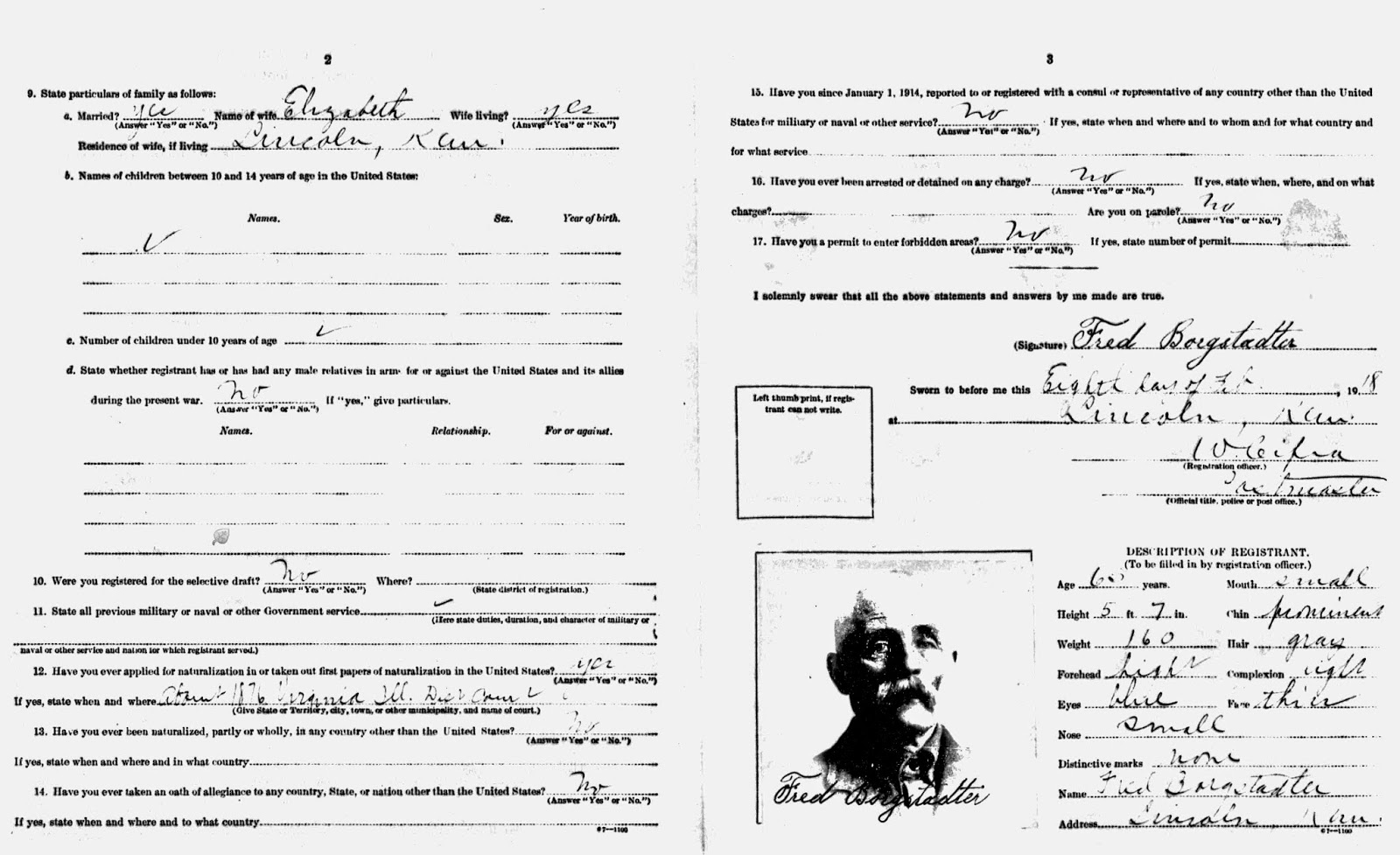 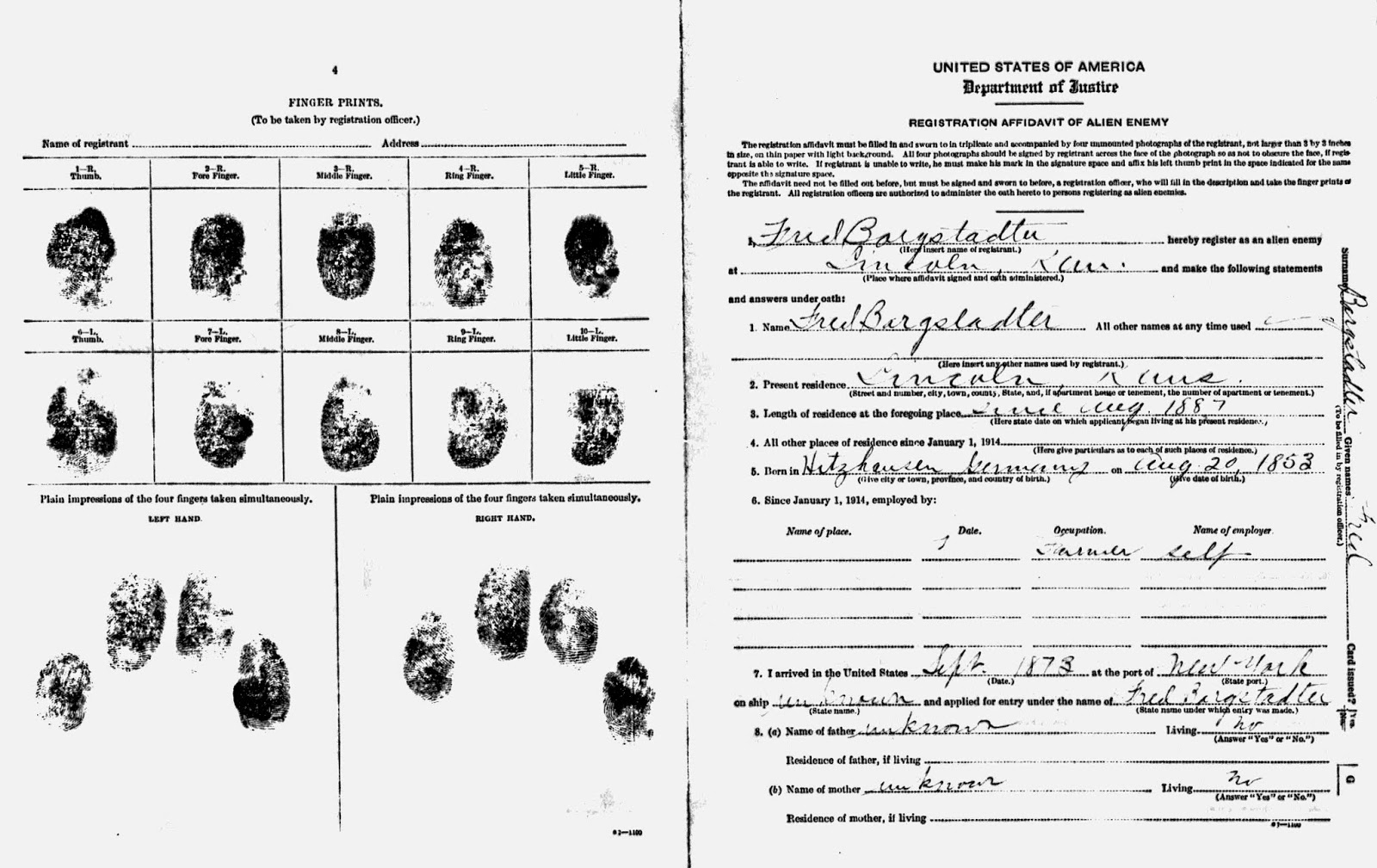 This record I am not sure how to cite.  I found the name Fred Bargstadter in an online index of Enemy Alien Registrations at the Kansas Council of Genealogical Societies website way back in 1999.  If a name was found in this index, the website advises one to contact NARA Central Plains Region to obtain the actual file.  So I wrote to them and they sent me the files for Fred Borgstadter and his wife Elizabeth.  Problem #1 - NARA Central Plains Region no longer exists, it is now the National Archives at Kansas City.  Problem #2 how do I explain all of the above - how I obtained and viewed the record (in 1999) especially now that digital image of the files are available at Ancestry.com?  Help with this would be appreciated.  In the meantime I came up with the following:
Citation - First (Full) Reference Note
Enemy Alien Registration Affidavit for Fred Bargstadter, 8 February 1918; Textual Records from the Office of the U.S. Marshal for the District of Kansas 1917-1921, NARA Identifier: 289130; Record Group 118: Records of  U.S. Attorneys, 1821-1994; National Archives at Kansas City (RM-KC), 400 West Pershing Road, Kansas City, Missouri.

In 1880 Fred Borgstadter files a Declaration of Intent to become a U.S. citizen with the Circuit Court in Virginia, Cass County, Illinois.  Twenty years later in Lincoln County, Kansas, the 1900 U.S. census record for Fred Borgstadter indicates that he is a naturalized citizen. A thorough search was done in the court records of  Cass County, Illinois and Lincoln County, Kansas but no  petition for citizenship (final papers) for Fred Borgstadter was found.  However, he could have filed his petition in any courthouse between Illinois and Kansas. It would take forever to look through court records in every county from Cass County to Lincoln County.   If one were to stop researching at this point (which I did in 1999) and evaluate the information in the two records, it is easy to come to the conclusion that Fred Borgstadter must have  been naturalized.

A short time afterwards I found Fred Borgstadter in an online index of Enemy Alien Registrations (see above).  This registration is proof that Fred was not naturalized as of 8 February 1918.  I think is not likely that Fred ever followed through after filing his Declaration of Intent back in 1880.

FOLLOW UP:  You will never believe this - one hour after I published this post, I was following a bunch of rabbits into their proverbial holes.  One of those holes led me to an Index of Naturalization Records for Lincoln County District Court in Kansas.  For years I have been looking for these records.  There is no microfilm for any kind of court records for Lincoln County, Kansas at the Family History Library. I sent an email to the clerk of the court asking for instructions on how to obtain these records.

Geeeez Louizzzzee - I thought this challenge of Myrt's was going to be a fairly simple task.  I am extremely grateful I did decide to participate.
10 comments: