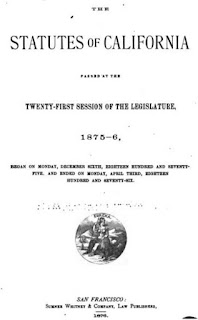 This publication can be found on Internet Archive

PAYMENTS MADE BY STATE OF CALIFORNIA

Chapter 93, pg 64
$6500 payment to John Jackson, ex-sheriff and Tax Collector of Trinity County for losses incurred by him in a certain prosecution against him in the U.S. Circuit Court in 1871 for collecting "foreign miners' license taxes"

Chapter 253, pg 332
$70.62 1/2 cents payment to John Breuner for furnishing shelves and desks for members of the Assembly

Chapter 331, pg 460
$459 payment to Laura De Force Gordon for publishing in the Daily Evening Leader at Stockton in San Joaquin County the delinquent list of purchasers of swamp and overflow land in District #5

Chapter 367, pg 511
$200 payment in gold coin to N. A. Covarrubias as a reward for the apprehension of Jack Cotton and Caroline Norton, murderers

Chapter 468, pg 687
$5000 payment to John F. Swift for services rendered as special counsel for City and County of San Francisco in a lawsuit against Spring Valley Water Company

Chapter 501, pg 761
$450 payment to George W. Whitlock for services rendered as messenger and porter in the office of State Board of Equalization

Chapter 65, pg 41
C. F. Leavenworth are granted the right to lay down suitable water pipes in the Town of Modesto, County of Stanislaus

Chapter 72, pg 47
E. Barry of Downieville, Sierra County, is authorized to remove the remains of deceased persons, along with all headstones, ornaments, etc,  interred in the "old graveyard" in the northeastern part of Town and rebury them within a suitable fence in the plot of ground adjoining the new cemetery northeast of town

Chapter 236, pg 310
David Girky is authorized to build a wharf at Santa Cruz

Chapter 328, pg 444
James E. Ryan was indicted by the Grand Jury of the City and County of San Francisco for the crime of assault with intent to commit murder and gave bail in the amount of $15,000 by a written undertaking with John Parnell, James Byrnes and Patrick Ryan as sureties. James E. Ryan fled the jurisdiction and did not appear for trial so the bail was forfeited.  The sureties took it upon themselves to recapture James Ryan and handed him over to the Sheriff of San Francisco.  The sureties were then released from liability of the bail

Chapter 438, pg 680
Property in Stanislaus County, belonging to Nancy Wilson, a widow, that had been sold to the State of California for nonpayment of taxes is quit claimed back to her for the payment of $47.25 in gold coin

Chapter 471, pg 688
George Green and James Smith of the City and County of San Francisco are relieved from all liability on a bail bond in the amount of $500 for the appearance of J. W. Adams
No comments: