In the 1861 California State Statutes (chapter 76, page 59) there is an act authorizing the public administrator, Jared Irwin, to sell the real and personal property of Zachariah Simpson and Nicholas Swan and that the money from these sales should be used in procuring the manumission of the children of the deceased from slavery in the State of Missouri.

I have been extracting genealogical information from the California Statutes for a couple of years and I have never seen anything like this before.  This brought to mind all kinds of questions:

Were these two free men of color?  Were they runaway slaves?

How did they get to California?

The deceased owned real estate?  I thought that minorities in the State of California at that time were not allowed to own real estate.

I needed some historical background before I went any further.

Despite its ratification in 1850 as a free state prohibiting slavery and indentured servitude, California wavered on the status of enslaved people.  California's legislators attempted to dissuade people of color from coming to California by enacting laws that deprived them of civil rights, denied citizenship, they could not legally homestead public land, they were forbidden from voting, holding public office, giving court testimony against whites, serving on juries, sending their children to public schools, and using public transportation.  In 1852, the state legislature passed the California Fugitive Slave Law, legalizing the arrest and removal of runaway enslaved Africans who arrived with their enslavers before statehood. Many African Americans were captured by bounty hunters paid to return them to owners. The law mandated that any slave brought to the territory before 1850 statehood was not guarded by new constitutional decrees protecting blacks in the state. African Americans won the right to testify in California in 1863 but the right to vote came only with the passage of the Fifteenth Amendment in 1870.

So Blacks could own land, but not homestead public land.

Next, I went to the newspapers and found an article about a coroner's inquest for Zachariah Simpson and his funeral notice. 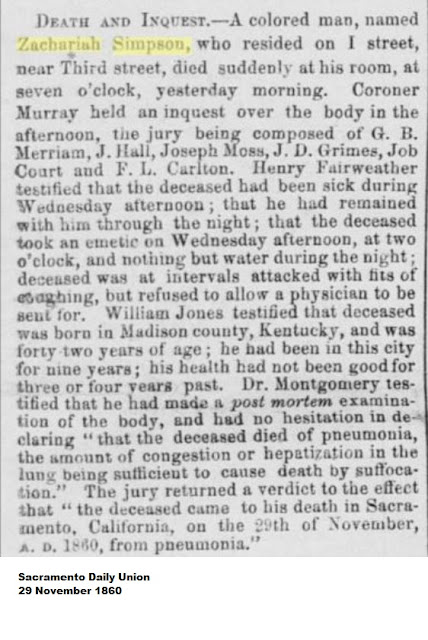 These two articles tell me alot about Zachariah Simpson:


I did not find any mention in newspapers in 1860 for Nicholas Swan.

Where would you look next for information?  Tomorrow's post will continue the research.