The Center for Sacramento History uploaded police mugs books dated from 1860 to 1948 to Internet Archive.

I can't tell you how many hours I have spent turning the pages of these books.  For some reason, I have found them absolutely fascinating.  There's even one that contains only Chinese men dated around 1860-1870.

Here are a few that I couldn't resist doing a bit of research on their stories. 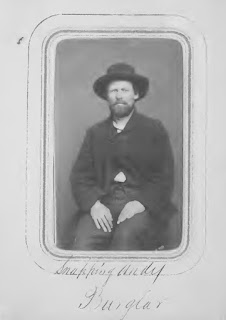 "Probably the most accomplished burglar on this coast is Andrew Johnson, alias "Doc" Johnson, alias "Snapping Andy."  He is considered the most espert in his profession and is better known and watched more by police throughout the entire State than any other thief."


He was given his nickname because he evidently would snap his fingers at the police each time they had to let him go for lack of evidence. 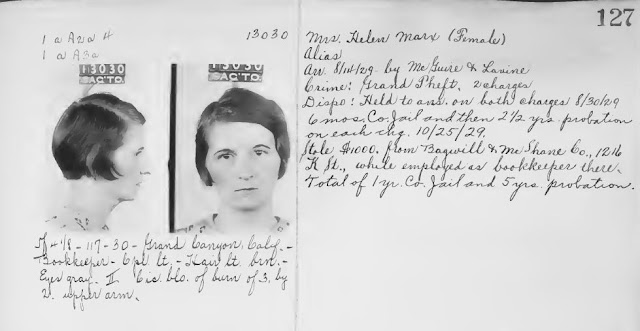 Mrs. Helen Marx, a cashier and bookkeeper for an automobile company, was arrested and charged with Grand Theft.  She was alleged to have embezzled $981.  She pled guilty on two charges and was given probation after serving 12 months in the county jail.  Her probation officer reported AFTER she was sentenced, that Helen admitted to embezzling 13 times in 1926, 16 times in 1927, 12 times in 1928, and 7 times in 1929.  She estimated she had taken over $10,000 in those four years. 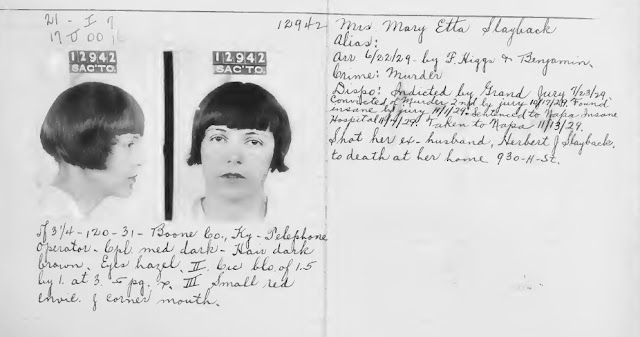 Mary Slayback was arrested and charged with the murder of her ex-husband Herbert Slayback.  She shot him four times.  It was a sensational trial, a packed courtroom every day.  Newspapers across the country carried the story on a daily basis.  Mostly because she was a very pretty young woman. 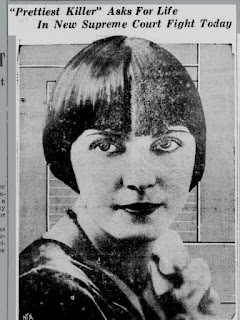 The 1929 sanity trial of Mary Slayback set a new precedent in criminal procedure in California courts.  It marked the first time since the legislature of 1927 enacted the law permitting a plea of not guilty by reason of insanity to be heard by a jury different than the jury in the original case.

I was unfamiliar with a term used in this court case - ALIENIST.  So I asked the Google and it is what today we call a psychiatrist.  No matter what the person was called, his antics in the courtroom did not help Mary at all.  She had to serve one year in the Napa State Hospital. 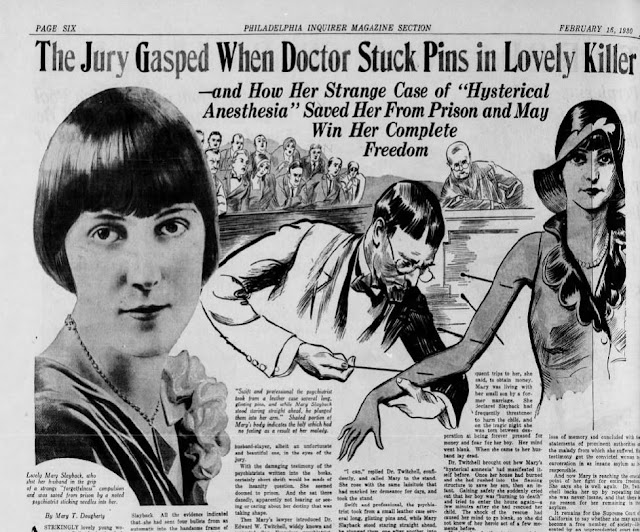