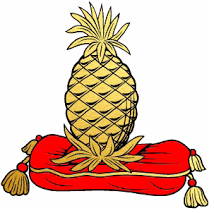 Before I left for my trip to Rhode Island,  Barbara Mathews informed me that pineapples symbolize welcome and they are carved everywhere in Rhode Island.  Well I didn't see any pineapples during my trip, but I did get to meet with several genealogists who until now I have adored and admired from afar. 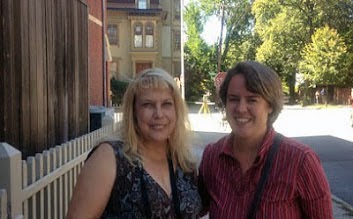 
Marian Pierre-Louis drove all the way from Massachusetts just to have lunch with me. We ate at a place she described as a shi-shi type restaurant. It didn't matter to me, I was thrilled to finally meet Marian in person. I don't know how she manages to get things done especially with a young family, but she does. And she does it well. Marian is the author of two blogs: Marian's Roots and Rambles and The New England House Historian. You will also find her presenting webinars over at Legacy. Her latest project is a weekly radio show called Fieldstone Common. The show airs live every Thursday at 1:00pm Eastern. Her guest this week will be Maureen Taylor - The Photo Detective - to discuss her newest books "The Last Muster" and "Fashionable Folks Hairstyles 1840-1900."


And this lets me segue smoothly into the next day when I had a lovely dinner and a grand tour of Providence at night by car with Maureen Taylor. I have met Maureen several times at conferences over the last couple of years but this was the first time I had her all to myself. After we had a lovely dinner she drove me around Providence, pointing out all the historical sites of the city. 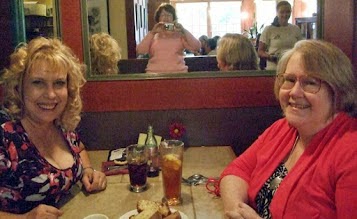 Diane and Me with Barbara in the mirror taking photo

I had yet another enjoyable lunch with Barbara Poole and Diane Boumenot. Diane is the author of "One Rhode Island Family." Although fairly new to genealogy blogging, Diane is not new to genealogical research. Her blog has a page devoted to free Rhode Island Resources that you won't find anywhere else! Barbara, who also drove from Massachusetts, is the author of two blogs "Life From The Roots" and "Seeing New England." She started blogging about the same time I did and felt like I knew her already. But meeting for the first time in person was way more than special for me. 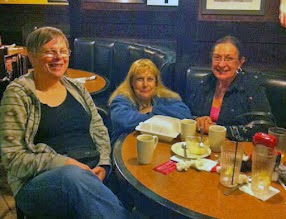 Barbara, Me and Sharon


Last but most certainly not least was when I drove to Massachusetts (without GPS or a map) to an extraordinary dinner I shared with Sharon Sergeant and Barbara Mathews. Both are brainiacs beyond belief. I had some previous interaction with Sharon through various online things. The first was back in 2006 when Ancestral Manor had presentations one could attend via teleconference. One of the best was when Tom Jones gave a presentation about writing for genealogical periodicals. This was way before webinars came on the scene. Barbara Mathews is a certified genealogist who works for the Massachusetts Society of the National Society of the Colonial Dames of America as a verifying genealogist. She is also the author of a great blog - "The Demanding Genealogist." Barbara is proof that CG's know how to have a good time. I wish that I had more time to chat about the experience she had becoming certified through the Board for Certification of Genealogists.


New England Hospitality. I experienced it first hand and will never be the same.