Answering The Challenge or Double-Dog Dare

Back in January 2011 Cheryl Palmer and I had lunch and decided to set some goals and try to achieve them using the Buddy System that Amy Coffin and Denise Levenick had implemented.  Cheryl and I became the Northern California Team, while Amy and Denise were name the Southern California Team.  This wasn't a contest but rather more reinforcement to help each of us achieve our goals set for the year.
Amy and Denise each chose three goals.  I chose only two and Cheryl had quite an ambitious list.  You can read about Amy's year end results HERE, Denise's final recap HERE and to read how Cheryl fared you can click HERE.
My first goal:
Write and submit a genealogical article to , well, anyplace that will take it.


I had been asked to write an article for the Idaho Genealogical Society about my "Problem With Pauline."  Halfway into writing, I found more information that will change the story and it was agreed to hold off on submitting the story for now.
A few days later I was asked by Kathryn Doyle from the California Genealogical Society and Library to write an article for their magazine "The Nugget."  The magazine has a recurring series entitled "California Ancestors" and she knew that I had done extensive research on a few San Francisco Pioneers.  So I did a narrative on my sister-in-law's ancestor David Nathan Walter who came to San Francisco in 1858.  I am pleased  the article was worthy of SIX pages in the Fall 2011 issue of the Nugget! 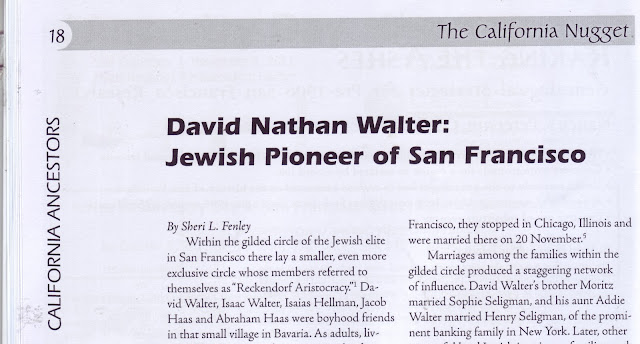 For my educational goals for the year, I really wanted to do something different. I read about some genealogists getting together and meeting in a virtual online world called Second Life. Through the use of avatars, they get their genealogy groove-on. The group has recently been approved and is a bona fide chapter of the APG - Association of Professional Genealogists.  This goal is going to take me way longer than I had anticipated. I can't seem to even get my avatar dressed and when I tried to change the hair style and color of her hair - well it somehow got snatched off her head completely so now I have a naked and bald avatar prancing around make-believe land and have not a clue as how to save my avatar from certain destruction. At the very least a ticket for indecent exposure.


Well my first attempt to participate had discouraged me so much that it took me until just last week to give it another try.  I am pleased to say that my avatar - JypsieBluze - has hair, clothing and I was able to navigate to the Just Genealogy Group meeting hosted by Clarise Beaumont aka Dear Myrtle last week. 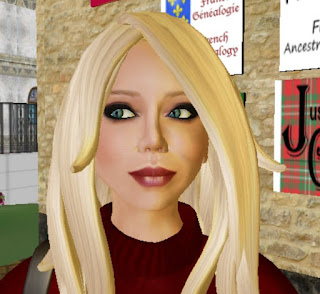 My Second Life Avatar - JypsieBluze
standing in front of a building at Just Genealogy
The Buddy System worked for me.  Being accountable for the goals I set made all the difference in the world as far as motivation was concerned.
So I am ready to set some goals for 2012 - who wants to be my Buddy???