A Primer On Setting Goals and Reaching Them

When I was about 35 years old, my best friend Suuz and I decided we needed to set some goals to achieve before we reached the age of 50. It seems like it was only yesterday that we we riding on that mechanical bull at Jack's Rodeo Bar and Grill having that very serious discussion of what we wanted to be or have accomplished by that ominous, dreaded age. My eldest son called me this past July to inform me that he was celebrating his 30th birthday. Despite my best efforts, he refused to believe my statement - "If he is now 30 years old, then I couldn't possibly be his mother. It isn't mathematically possible because I am only 27." He wasn't going for it, and so my quest for goal achievement was on again.

I surprised even myself when I pulled out that bar tab from Jack's to have a look at my list that had been written 15 years ago . We had each 10 items to experience, try or accomplish by age 50 and I had only 1 left.

While I refuse to divulge the entire list, I will share 2 of the goals that I reached.

I had never been horseback riding. Neither had Suuz and being best friends she also had added the same item to her list. At the age of 40, we went to Half Moon Bay, California and rode horses. Well I really don't think the one I rode was a horse, I still think it was a donkey. Suuz still insists that it was a horse, just a short one. She told me that I should have been more appreciative of the stable owners consideration in matching the horse to my height. There was a group of about 10 of us and once we were all mounted, a guide led us to the beach. I was a little disappointed that we weren't moving as fast as they appear to in the movies, but I told myself that maybe that was special effects or something.

The "horses" were very well trained. All of us in a straight line, nose to tail, without having to tie them together. Once at the beach I was supposed to get the thrill of a life time. Each of us were to leave the posse, one at a time and race the "horse" down a stretch of beach. I sat there waiting for my turn, envisioning myself galloping down the beach in the surf, my hair flying behind me....

Here's why I am convinced my "ride" wasn't a "horse". The first five of us that went down the stretch did so exactly as I had imagined. My "horse" must have been either mentally or physically challenged (or both). There was no galloping. There was no hair flying. There was no "being one with the horse" and bouncing up and down in perfect rhythm.

I had gently used my heels to encourage it to move along and the damn thing turned around and bit me and then (to add insult to injury) WALKED down the shore line for 100 feet, stopped and threw me off his back. Imagine my disappointment.

He we are 10 years later and I had one goal left to achieve - I have never, ever been on a motorcycle. Suuz says that the one I paid a quarter to ride in front of the grocery store does not count because it never left the merry-go-round it was welded onto. While I was really bummed that it wasn't a sanctioned ride, it did bring my youngest son and I closer together. He just recently finished up with a year of therapy and group counseling. He happened to pull into the grocery store parking lot the same time I was riding in my merry-go-round motorcycle. He tells me now that he is a much stronger person and that he knows I was only expressing my love for him when I was shouting at the top of my lungs, "I'm Kristopher Fenley's Mother!" while enjoying my ride. In fact it is my youngest I have to thank for making the arrangements for me to reach my final goal before I turn 50 - 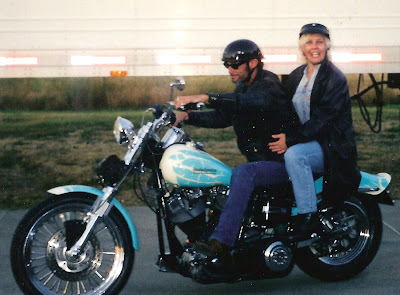 I really need to get ahold of Claire Bettag and see if she wants to "motorcycle-pool" next year to Samford!

There really is a genealogical purpose to this posting. Set goals for not only for yourself but for your research projects as well. Make the time limit you set realistic enough that you can achieve them with a little effort and imagination.