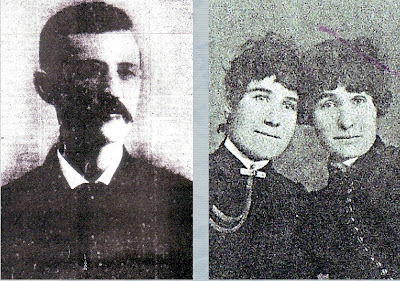 OK, here it is, the last event I need to get the Diamond Medal in the category
Write, Write, Write! a biographical about one of my ancestors and for the category Go Back And Cite Your Sources! the last 20 citations I needed.

MICHAEL DELANEY and the WINTERBOTTOM SISTERS - LILLIE and ABIGAIL

Michael Delaney is the eldest child of my 3rd great grandparents Daniel Derondo Delaney and Ellen Collins. Daniel and Ellen were born in Ireland. Daniel in County Kerry and Ellen in County Cork. They were married 3 December 1849 at St. Mary’s Catholic Church in Buttevant County Cork, Ireland. After crossing the Atlantic Ocean, the Delaney’s arrived at the Port of New York on 8 January 1851 aboard the “Elizabeth Bentley”. By September of that year they had made their way North to Lockport, Niagara County where Michael was born 3 September 1851.

Daniel was a stone mason but upon arrival in America, he found himself a contractor to the railroads. Daniel had a team of men that graded the land where the new tracks were going to be laid. He must have been a hard worker and good at his job. The New York Central Railroad line from Lockport, south west along the southern shore of Lake Erie to Cleveland, Ohio and south west even more to St. Louis Missouri, lines up neatly with the Delaney family’s migration westward.

The family migrated north to Waterville, Marshall County, Kansas where we find Michael Delaney is now 19 years old. Michael worked alongside his father in railroad construction until the line was completed in Waterville in 1879. Daniel and Ellen decided to move south to Elk County, Kansas. Michael and and a younger brother George, elected to stay in Marshall County. George went north about 35 miles to the town of Axtell.

In 1879 Michael purchased a mercantile store from J. E. Peters. He owned and operated this store until he sold it in 1907.

All three boys moved to Taloga, Dewey County, Oklahoma and all three worked as bankers for the 1st National Bank. A first cousin to their mother, J. W. Thompson, was the president of the 1st National Bank and of Citizens National Bank. In 1917, all three boys registered for the draft during World War I. All three were shipped overseas to serve their country. Only two of them returned. Daniel Derondo Delaney was killed in action in February of 1918. His widow Maud and son Roger Delaney survived him. Daniel was buried in Riverside Cemetery in Waterville. Frederick came back to his job as a banker and married Daisy Hvare. They relocated to Ventura, California and had three children: Fred George Delaney, Mary A. Delaney and Lillian Patricia Delaney. Frederick died in Ventura, California 7 April 1965 and was buried in Riverside Cemetery in Waterville. Carl married Ethel Florence Mc Elhaney and moved to Paradise, Butte County, California where they had one son Carl Roderick Delaney. Carl died 29 August 1976 in Paradise and was buried in Riverside Cemetery in Waterville.

Lillian died on 31 May 1893 and Michael remarried to her sister Abigail Winterbottom on 25 June 1895. Michael was an active member of the community, as the following list will confirm:

*Appointed Postmaster of Waterville 1888 - 1893 and again 1897-1913
*Elected as Mayor of Waterville and served two terms
*President of the Waterville School Board for seventeen years
*Chairman of the Waterville Township Central Republican Committee for twenty years during which time he also served as a delegate to district and state republican conventions.
*Vice president of Citizens State Bank
*Served as treasurer for the Riverside Cemetery Association
*Served as treasurer for Sutton Lodge No. 85
*Served as a member of the City Council of Waterville
*Supreme Treasurer of the Triple Tie Benefit Association for fourteen years
*A member of The Independent Order of Odd Fellows
*A member of The Ancient Free and Accepted Masons for 55 years
*First President of Waterville Telephone Company
*Member of the Modern Woodmen of America
*Organized the construction of the new City Hall in Waterville
*Member of the Methodist Episcopal Church
Michael died 1 May 1938 in Waterville and is buried in Riverside Cemetery.