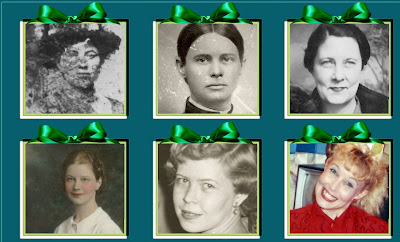 (click on photo for larger image)
Is this like a "If you show me yours, I'll show you mine" kind of deal? (Randy Seaver should appreciate that bit of humor)

Straight off the top of my head, the first thing that came to mind is a photo collage that I made of 6 (yep, count em six) generations of my maternal line. I made it after I was finally able to locate the 6th generation.

Starting at the top left hand side of the collage you find my 3rd great grandmother MARGARET DILKS ROBINSON. Margaret was born 16 May 1839 in Allegheny County, Pennsylvania to Arthur Dilks and Margaret Bowman. The Dilks family lived in Moon Township (a suburb of Pittsburgh) near the Ohio River. She met a blacksmith from Ireland, David Robinson, fell in love and they were married 28 August 1855. Margaret and David had nine children, all of whom lived to adulthood. After David died on 21 October 1895, Margaret went to live with her youngest daughter, Margaret who had married Carl Metz. Margaret died at the age of 96 in Burlington, Des Moines County, Iowa on 28 October 1935.

A little tip here: I found the names of Margaret's parents in the 1925 Iowa State Census. On the 3rd page of the census, the enumerator is instructed to ask the names and places of birth for the parents of each person in each household.

The serious looking woman in the center of the top row is my 2nd great grandmother Laura Cordelia Robinson, the second child of David and Margaret Robinson She was born 12 June 1862 In Moon Township, Allegheny County, Pennsylvania. Around 1868, The Robinson family moved to Dodgeville, Des Moines County, Iowa. Laura met and married William Campbell Berry on 19 September 1880 in Des Moines County, Iowa. In 1900 W.C. and Laura Berry were on the move. First to Jackson County, Kansas and then to Allen County, Kansas where they lived in several different towns. Over a 20 year period they lived in Moran City, Le Harpe, Iola, Humboldt and Elsmore. After William died on 13 July 1921, Laura remarried to Christian Ermel on 1 July 1925. Christian died 1 January 1950 and Laura went to live with one of her youngest daughters. She died at the age of 89 on 15 April 1951 in Garnett, Anderson County, Kansas and was buried in the Highland Cemetery near Iola, Allen County, Kansas.

My great grandmother, Hazel Bertha Berry is on the top right side of the collage. Hazel was born 15 July 1896 in Franklin Township, Des Moines County, Iowa. Hazel was a very short woman, 4 1/2 feet tall. She married Hillary T. Harris on 4 November 1915 in Allen County, Kansas. H.T. Harris was 6ft 5in. My mother told me that in every photo they ever took, H.T. is always sitting and Hazel is standing. My mother also shared a fond memory of Hazel with me. My mother remembers spending all day on Sundays at her grandparents house. Hazel could always be found (or heard) in the kitchen cooking at the stove or at the sink doing the dishes belting out old gospel songs with a cigarette hanging out of her mouth (hmm, this must be a genetic trait). Hazel died at the age of 69 on 24 June 1965 at her home in Garnett, Anderson County, Kansas.

The lovely young woman in the bottom row on the left is my grandmother Maryellen Harris. Maryellen is the only child of Hillary T. Harris and Hazel Bertha Berry. She was born in Bronson, Bourbon County, Kansas on 29 September 1916. After Maryellen graduated from Garnett High School in 1934, she and a girlfriend went to Topeka and became "Harvey Girls". Darrell Kenneth Skillman was a year behind Maryellen at Garnett High School. When he graduated the following year in 1935, he went to Topeka and brought Maryellen back home and they were married 4 November 1935.

The eldest child of Darrell K. Skillman and Maryellen Harris is my mother, Darlene Mary. Or as I like to call her "Mummy Dahling". And last, but certainly not the least, is yours truly. Recognize the party hat?

So there you have it 6 generations of my direct maternal line. Good thing I don't have a photo of my 4th great grandmother, I would hate to break up a 6 pack! 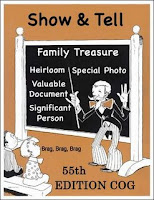 Submitted to the 55th Edition of the Carnival of Genealogy