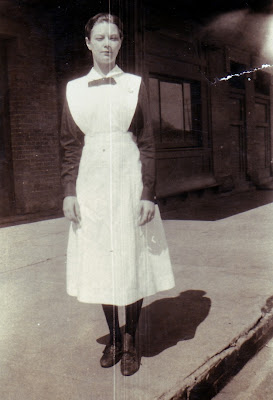 This lovely young lady is my grandmother Maryellen Harris Skillman. Maryellen is the only child of Hillary T. Harris and Hazel Bertha Berry. Born 29 September 1916 in Bronson, Bourbon County, Kansas. The little Harris family moved to Garnett, Anderson County, Kansas around 1930 where Maryellen attended Garnett High School. After graduation in June 1934, Maryellen and a girlfriend packed a suitcase and went to Topeka where they found a job as "Harvey Girls".

Darrell Kenneth Skillman was a year behind Maryellen at Garnett High School. When he graduated in June 1935, he left immediately for Topeka, found Maryellen, married her and brought her back home to Garnett where they all lived happily ever after!

ABOUT HARVEY GIRLS AND HARVEY HOUSES

In 1876, a young Englishman, Fred Harvey, got tired of eating poorly cooked and indifferently served food while traveling, so he negotiated with the Santa Fe Railway to manage their restaurants and hotels, a handshake deal that lasted over 80 years.
The Fred Harvey Company would recruit women via newspaper ads from towns and cities across the United States. The women had to be of good moral character, have at least an eighth grade education, display good manners and be neat and articulate to work in his restaurants

He hired young ladies between the ages of 18 to 30 who were of good character, and who radiated an image of wholesomeness. The girls dressed in a simple black dress with a white neck collar, a black bow and starched white apron with no jewelry or make-up.
The stipulation that girls be of high moral character indicated explicitly the conduct that Harvey required of his female employees. Harvey Girls were paid a salary of $17.50 per month plus room and board and gratuities. They lived in dormitories that were always near their work and were chaperoned by a matron who enforced their ten o’clock curfew. They were required to sign a contract promising not to marry for a year or until their contract expired. 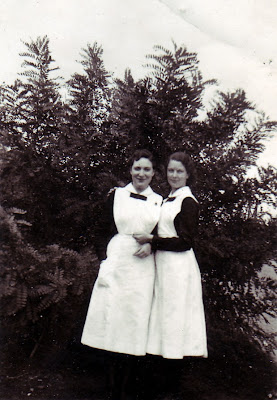 The Harvey Girl Historical Society is located at The Orange Empire Railway Museum. Both are located at 2201 South "A" Street, Perris, California 92570 which is about 50 miles west of Los Angeles.