The Streets of San Francisco

I have been having entirely too much fun lately! Surely you must remember my previous articles about my SIL (sister-in-law) family. No? (GASP!) Well, click here and here and here so you can catch up with the rest of us. Go ahead, we'll wait for you.

Glad to see you found your way back. On with the story.....


Countless passport applications, census records, city directories, newspapers and social registers were used to record the addresses of her family from 1857 to 1930. These are both business and residential addresses all located in San Francisco.

After I finished plotting over 60 different addresses, I sat back and looked at the map. What a story it tells. 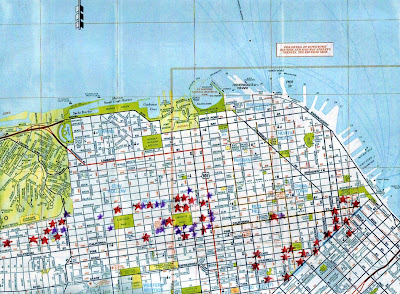 The red stars are where SIL's immediate families of ancestors lived and the blue stars are the residences of the more distantly related lines. 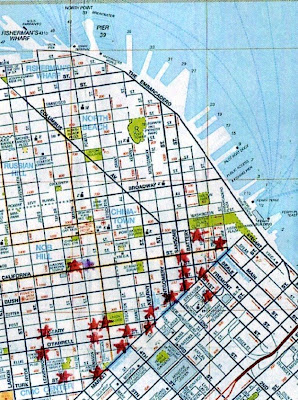 Cropped from the map above, this area shows where the families first built their homes and businesses. The time period covers from about 1857 to 1885. 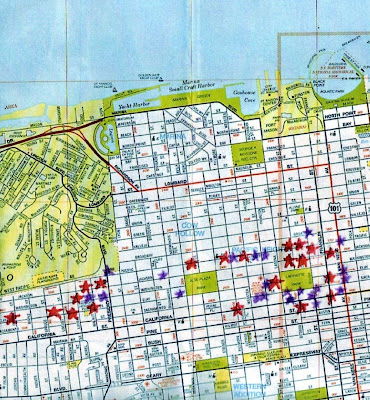 Around 1885, they left their businesses in the same place, but moved their residences west. You can clearly see the group moved almost as one to an area now known as Pacific Heights.

My original thought was for SIL and I to spend a day in the city taking a walking tour of the addresses. I realize that things have changed and probably none of the homes are still standing, but the idea was to get a feel for things, a sense of place.

Through my research I found that in the early years in San Francisco, the most economically successful Jewish families formed their own exclusive circle, comprised of interrelated clans linked by blood, marriage, and business.

Stephen Birmingham writes - "They have referred to themselves as "The One Hundred"... They have been called the "Jewish Grand Dukes". But most often they have simply called themselves "Our Crowd."

In an historical essay by Kate Shvetsky entitled "The Gilded Circle", members had a strict code of behavior: 1. Make money 2. Marry one's own kind (German Jewish) 3. Belong to Reform Temple Emanu-El or to no other congregation 4. Acquire tastes of people of rank.

I was hooked on SIL's family from the time I realized how much a part of the history of San Francisco they were. Learning that they were also part of the social elite now has got me hooked, line and sinker!