If At First You Don't Succeed, Look What Trying Will Do!

I spent the entire weekend working on my sister-in-law's family history. What a ride it has been! Today I will tell you about one branch of this interesting family tree.

Her 2nd great grandfather is Aaron Meier. Aaron was born 22 May 1831 in Ellerstadt, Bavaria. Aaron immigrated in 1855 to Downieville, California where 2 of his brothers (Julius and Emanuel) had settled before him. He soon moved north to a plot of land in Wilsonville, Oregon and he began selling merchandise from a pack in the rural areas south of Portland.
By the time he was 26, Aaron Meier rented a 35 X 50 foot space and began selling dry goods at 137 Front Street in Portland in 1857. His father died in 1864 and Aaron went back to Germany to collect his inheritance. While he was there, he met and married a local girl - Jeannette Hirsch. When he returned to Portland, he found that his partner in the business had become involved in some trouble and the business had been sold out.

So Aaron took his inheritance and open another store, a dry goods establishment located on Front Street between Yamhill and Taylor. On one of his trips to San Francisco to purchase stock for the store, he met Emil and Sigmund Frank. He brought them up to Portland to work as clerks in his store. In 1873, Emil Frank became a partner of Aaron Meier and the signs were changed to Meier & Frank.

In 1882 a fire destroyed the establishment and Aaron lost everything. Aaron Meier refused to give up. They somehow rebuilt the store, making it bigger and better than ever before.
By 1885, they had moved to a new building on Taylor Street, between First and Second Streets. That year Emil Frank's younger brother Sigmund, who was working for the store, married Meier’s only daughter, Fannie.
Aaron and Jeannette had 2 other children - Abraham Meier (my sister-in-law's great grandfather) and Julius Meier.
Aaron Meier unexpectedly died at age 58 on August 18, 1889, while eating breakfast.
In 1900 Abraham took the helm of the business. Abe’s younger brother Julius became the store manager and actually guided the store’s growth. Julius Meier had a great deal of influence in civic and political circles and was elected Governor of Oregon in 1930 as an independent—the first Jewish Governor of the state.
The Meier and Frank building is still standing in Portland. 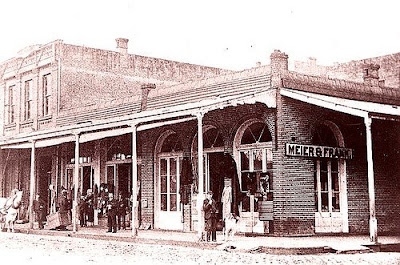 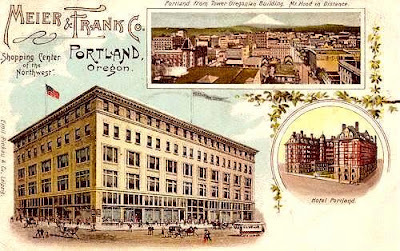 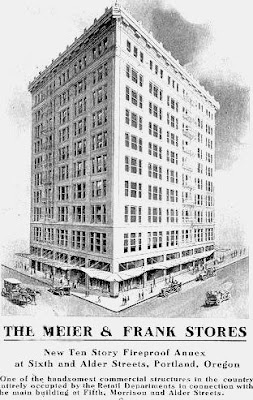 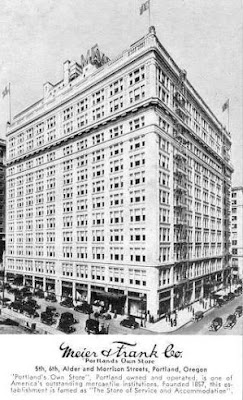 I have had such a blast pouring over society pages of the Portland newspaper of the time. On ancestry.com, we were delighted to see passport applications (some even had photos) as well as ship passenger lists. Over at genealogybank.com I found an abundance of newspaper articles and obituaries on the Meier family. At heritagequest.com, it seemed that every book about the history of Portland, Oregon has some mention of her Meier family.

I am getting a quick education in American and German Jewish Genealogy. I am also becoming a quick study of the history of Portland, Oregon.
Here's a hint about the next installment of my sister-in-law's family - a member of her family went down with the Titanic!